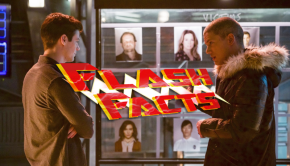 I’m loving that any episode involving Snart has a movie homage title.

This show is the gift that keeps on giving.

Time, like karma, tends to bite you in the ass. Unless you’re the audience, then you get a fantastic show!

“What killed the dinosaurs? The Ice Age!”