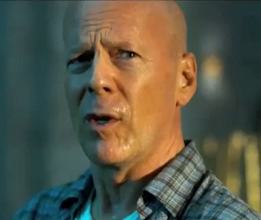 Tease Me, Baby! – A Good Day to Die Hard

I’m really not sure if I’m excited or depressed about there being five Die Hards in existence. On one hand: Bruce Willis is an ageing actor in a movie series of decreasing quality. On the other hand: Die Hard.

Considering the movie is out next month and this is the first time I’ve seen the trailer (released back in October) it’s quite possible that I’m not that only one who is aprehensive about Die Hard 5. It’s only a minute and a half long too, which makes it 30 seconds shorter than the average trailer. Either the studio thinks this will sell without any effort or they don’t want to put much money into marketing a turd. Oh dear.

However, there is no way to know what it’s going to be like without watching the thing so lets take a look, shall we?

We all know John McClane’s catchphrase. To see him say it in what is no doubt one of the first scenes of the movie (he’s entering the airport that takes him to the destination of the movie so, I’m thinking… 5 minutes into the film?) seems a little anti-climactic. Maybe they’re just trying to stop making it a big deal. I don’t know, but it seems like a strange place to put it.

For the first time the action takes place outside of America which is funny considering how the first two movies featured airplanes. While the location is new for Die Hard, the country is very familiar to action movies. I’ll never understand America’s fascination with making Russia an enemy in movies. Yeah, I get that the cold war happened, but considering you never had an actual war with them it just seems mean at this point.

See that up there? That’s a big warning alarm. Know why it’s going off? Because John McClane’s son just showed up. In the history of action movies, sons showing up is a death knell. A siren of the apocalypse. It is the last nail in the action hero’s coffin. It is the producers trying to appeal to a younger viewer demographic because they think the lead star is too old and in a movie like this, that’s not good. Just ask anyone who saw the latest Indiana Jones.

Listen, I’ve pointed out some worrying aspects of the movie but at the end of the day, Die Hard is always good as long as it has Bruce Willis running around in a white tank top getting bloodied and battered by the bad guys. We’ll have that right?