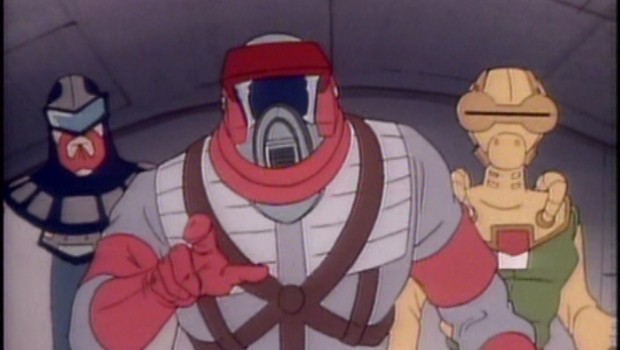 They Don’t Make Them Like They Used To is a little section on this site where I talk about old TV show theme tunes that I think are wonderful and you scratch your head wondering what I’m talking about (you damn kids, get off my lawn!).

M.A.S.K. was one of those cartoons that were pretty much only made to sell toys. Considering that the toys were excellent, I can’t complain. Much like Transformers there were lots of cars that changed into something else. However instead of changing into robots they changed into other vehicles, usually something that flies. All the characters wore masks that had a power of some kind but you usually lost that part of the toy within the first week. As a kid, this was more than enough to hook me in.

The name M.A.S.K. stood for Mobile Armored Strike Kommand because fuck spelling. Like every show of it’s time it featured a kid who tagged along despite his parent’s protests but what made this one stand out is that he had a robot friend named T-Bob (short for “thingamabob”) who looked suspiciously like R2-D2 and could become a motorcycle at the drop of a hat. Neat-o!

Check out those amazingly futuristic green lined graphics at the start! That’s how you know it’s quality.

I love how it describes the show in full just in-case you’ve never seen an episode before. It’s a wonderful bit of easy exposition that shows sadly don’t do anymore.