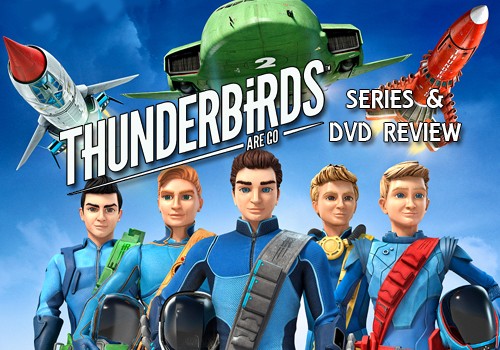 With the mid-season break for Thunderbirds Are Go racing toward us, I thought this would be the perfect time to give my impressions on the show but not only that, but I’ve been lucky enough to receive a DVD test copy of Volume One! Here’s the details! The Thunderbirds Are Go DVD (Volume 1) will be released in stores from 22nd June 2015 showcasing 13 episodes from the thrilling new series!

Thunderbirds Are Go is an exciting mixture of CGI and live action miniatures. Whenever disaster strikes, International Rescue answers the call!  From their hidden island base in the south Pacific, the five Tracy Brothers pilot remarkable, cutting-edge Thunderbird vehicles from the depths of the oceans to the highest reaches of space – all for one purpose: to help others in need.

Continue the F.A.B. action and complete your own missions on the Thunderbirds Are Go website! The International Rescue training programme is now open for recruit registration!  Take part in IR training missions, earn badges and rewards and work your way through the ranks! Sign up and find out if you can crack The Hood’s weekly challenge! Technically, the DVD is quite competent. The UI is thematically consistent with the show and even plays clips from the show while waiting for you to make your decision. The episode selection screen is easy to navigate and the set-up menu lists a bunch of options for languages and subtitles. If there’s one drawback, it’s the lack of special features. Considering the amount of behind the scenes footage that exists, it’s a shame that none of it is included.

Moving onto the show proper, the series has been a fantastic jaunt through various exotic locales, crafted beautifully by the WETA Workshop. The lengths the WETA team has gone to create these living, breathing worlds in which the CGI characters inhabit is astounding. Little movements of the physical set that coincide with character interaction is really interesting to see.

The Thunderbirds have also been given a radical new lease on life, with every iconic vehicle getting a substantial overhaul, if not visibly, then functionally. TB1 operates in much the same way it always did but with some new gimmicks and TB2 (my personal favourite) is just as cool as it was 50 years ago! Though I do lament the lack of iconic Pod machines…

Oh, they’re there. The Elevator Cars and Mole are present but very different. Pod 2 contains a mobile factory in which the two chassis are fitted with modular components to suit whatever mission TB2 is dispatched for. It’s a REALLY neat idea and I do like it but there’s a charm to the dedicated machines of old. Then again, there’s still another 4 Pods unaccounted for so maybe my dream of a 2015 update to the Firefly and Recovery Vehicles may still come true!

Despite the shortened run time (From 50mins to 22mins) there’s plenty of characterisation (and a few lame running gags, unfortunately). Scott tends to be the most boring, as de facto leader in his father’s absence but still has the odd flash of coolness. Virgil has been firmly established as the ladies’ favourite and I can’t argue. He’s got the masculine lumberjack thing going for him and a bucket full of charm and wit. Alan is bratty and probably the least interesting and John has tons more flavour to him than his predecessor. Kayo is a reinvented Tin-Tin and is quite the action girl, being a tomboyish counterpart to Lady Penelope. (Kayo even gets her own Thunderbird, though it hasn’t got any real play in the first half).

Speaking of Lady P, her blossoming romance with Gordon is quite interesting and the characters play off each other quite well.

Overall, I’m really digging the series and the few flaws aren’t enough to turn me off. You can pre-order Volume One of Thunderbirds Are Go from iTunes and Amazon UK and is set for release on the 22nd June with an RRP of £14.99. What do you think of the show so far? Be sure to let me know in the comments and keep a look out in the future for more Thunderbirds Are Go content!