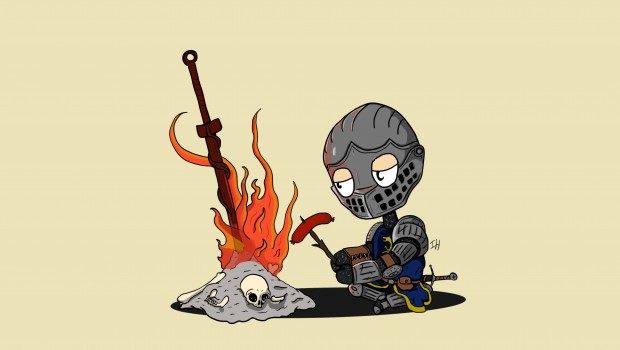 So You Want to Play Dark Souls…

With the release of Dark Souls 2, many people are eager to hop onto the masochist train, and play the original Dark Souls. This series of games have a reputation for being blindingly difficult and unforgiving. Many people boot up the game, only to be overwhelmed by the steep learning curve and complex systems. These barriers to entry turn many people off of Dark Souls, and they leave before the game hooks them.

See, according to my research, there is a cycle everyone goes through when playing Dark Souls. For the first three hours, it is the “Worst Game Ever.” It’s confusing and clunky, and leaves the player feeling like an abandoned child in a shopping mall- if everyone else in the mall had knives. However, after that three hour point, the player gets in sync with Dark Souls’ philosophies, and something clicks. Thus, an addiction of sorts is born. Instead of spending several paragraphs explaining the obtuse combat and leveling systems, I’m going to take this opportunity to explain the mentality a new player should approach Dark Souls with. Coming at the game with the right mindset that develops good gameplay habits early on will lead to a smoother, more rewarding experience. Success in Dark Souls is not limited only to the player’s skill, but their willingness to play by the game’s rules.

These are the 5 things I feel every new player should approach the game knowing.

Don’t get me wrong- Dark Souls is hard. But with the word-of-mouth way the game’s popularity spread, Dark Souls developed an almost mythical difficulty. Know that while things in Dark Souls are difficult, nothing is unbeatable. So if you come to an area that seems nearly impossible, it is somewhere you need to return to later when you are more powerful. Don’t waste time beating your head against a brick wall you’ll never break down- use that time to bash your head against a brick wall that will crumble eventually! 2: Slow and Steady Wins the Race!

Dark Souls is a slow game. It likes to take its time, and wants you to savor the moments for as long as possible. If you try to rush through it, it will take out your kneecaps with a sledgehammer, and fart on your face as a punishment. Try to move through areas slowly, fighting enemies one at a time if possible.  Take the time to prepare for every battle, and don’t hesitate to fall back to an earlier part of any area. Rash behavior will be met with swift death. You’ll either get surrounded quickly, fall off a cliff, or get an unmanageable horde of baddies coming for your tasty butt-meats. You don’t want that, do you? Take it slow, then. In Dark Souls, you need to be half Simon Belmont, half Indiana Jones. Exploring every area as well as you can is crucial to finding some of the best items in the game, making things easier in the long run. Rummage through every nook and cranny, delve into the darkest depths, and be rewarded. Don’t be afraid to explore, but be prepared for the dangers lurking in the shadows. It’ll make you feel like a badass when dodge traps, disable enemies, and collect loot. Make the entire the game into a longer, more satisfying experience, and explore!

As you work your way through an area, you’ll accumulate a large amount of the game’s currency- Souls. Souls are used to do everything: from purchasing items, upgrading and repairing weapons, to leveling up, you’ll need to have Souls. However, when you die, you lose all your Souls. If you don’t reach the point where you were slain before, those Souls are gone forever. This will happen. Don’t fret over losing a large amount of Souls. If you panic trying to save yourself from spiritual bankruptcy, you’ll drive yourself toward death faster. 5: Death is Natural, Embrace it

You will die in Dark Souls. Don’t fight it. Use every pass through an area as a lesson. Use it as a chance to get more familiar with enemy patterns, and learn to memorize enemy spawns. Once you know how enemies will attack, and where they come from, the difficulty level of an area will plummet drastically. This philosophy applies doubly so to boss fights. Don’t bum-rush the boss in a frantic attempt to put it down. Take your time, and learn the boss’ patterns. If you die? So be it. Next time you fight it, you’ll have a better understanding of how to fight them. Rinse and repeat.

If you follow these tips, it will not only make Dark Souls easier to play, but they will make the game a more enjoyable experience overall.