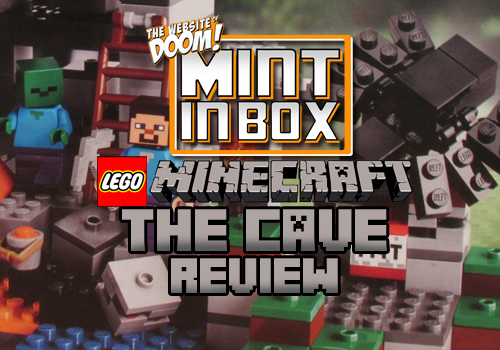 To say Minecraft is the smash-hit video game of the decade would be hyperbolic of me but you can’t deny the impact that this little survival/construction game has had on our cultural zeitgeist and why shouldn’t it? It’s building block visuals have a charm to them and satisfy a primal urge in all of us, to build our own world and what better partnership to craft than with LEGO, the original world builders? Throughout 2013, LEGO released Micro Worlds, micro-scaled cubes that were Minecraft worlds condensed into themed blocks and that was awesome! Now, as of November 2014, LEGO is launching minifigure-scaled sets and I was very hesitant to the idea, something struck me as immensely wrong about it. Has that opinion changed? Read on and find out! 21113 The Cave is the entry point set of this theme, retailing for around £19.99, and you can tell right off the bat that this a Minecraft product. Even without the logo, the design elements LEGO have used are undeniably evocative of the video game and I kinda dig it. The minifigs are presented in inventory slots and the text is in the Minecraft font! Contents include the instruction manual and two bags. This is where my main problem lies, the minifigures. That’s not to say they’re shoddy, the plastic quality is definitely up to LEGO’s high standards but it’s the execution. In this set, you get Steve, a Zombie and a brick-built Spider and I think the biggest problem is the head piece for the minifigs. A cube-shaped head on a LEGO minifig body just looks… Wrong. I’m sorry if I’m being vague but it’s just something I can’t help but feel. I don’t think it helps that Steve’s head is just a solid brown cube with a little face printed on it (and his trousers are the wrong colour in every set but I’ll freely admit that is the PETTIEST nitpick I have ever had as a toy reviewer and I’m not proud of it). The Zombie is wearing exactly the same clothes except for green pixels instead of flesh coloured. On a positive note, I do like how the design team adapted the pick-axe though, it looks super cool and the brick-built Spider looks amazing. The new head brick for the animals is a fantastic piece that could be used for all sorts of sets in the future. My personal gripes aside, I think Minecraft fans of any age will adore these minifigs. Getting into the build proper and, surprising to myself, I had an absolute blast. While this may appear to be a very simple build for the most part, there’s a few interest design choices that I adored. The key feature of these Minecraft sets aren’t just the natural synergy between the brands, but the steps taken by LEGO to give the Minecraft experience without taking the entire set apart just for blocks. They ingeniously came up with a special Item Block design to have many of the world’s natural resources (such as gold and redstone ores, in this case) represented, customisable and given the ability to be easily placed on the world or each other. I could easily replaced those gold studs with blue and have a lapis lazuli ore block ready to go! That’s a brilliant choice and I applaud it. The other design choice that I get a kick out of are the colour choices. Maybe it’s because I’m coming directly off a Hobbit review but the vibrant colours just pop out in my mind and, weirdly, made me excited to keep building. It didn’t feel like I had to do it for a review but that I wanted to do it for fun. The vibrant oranges, blues and greens must be appealing to my inner child or that the contrast against the subdued grey blocks makes the colours pop that much more. Anyway, as a buildable diorama, The Cave is a nice little microcosm of the Minecraft world. The design elements as well as the iconic characters really build the illusion of this world and it works out fantastically. The two bags are split into the cave itself and the cave mouth that is leading to a field outside. But if you thought we were done, you’d be wrong because another awesome thing LEGO opted for was the inclusion of “Rebuild Inspiration”, a small set of additional instructions to help younger builders with ideas on how to use this set to create an ever-expanding world. The instructions are very simple and the conversion time was barely five minutes. Thumbs up for that idea, LEGO! They also give you a look at other sets and give you a website url where you can submit your very own LEGO Minecraft creations! That’s a great way to build a community using these sets and to encourage bigger and better builds! Final thoughts are extremely positive! I admit that my own feelings about the minifigs aside, they were much better in hand than I imagined they would be and The Cave build itself was a wonderfully fun and pure LEGO experience for me so I definitely recommend this set to everyone, from Minecraft fans to LEGO fans in search of a new experience.