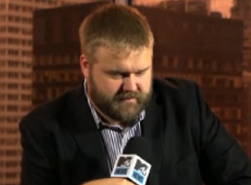 Robert Kirkman is gunning for my job.

Well, maybe not really, considering he’s one of the biggest comic book writers in the industry I’m sure he isn’t jealous of a mere internet reporter. However, as we here at DOOM love to gab about the latest geeky movie trailers we feel a little affronted that Kirkman has decided to muscle in on our territory slightly.

MTV managed to get the writer of The Walking Dead and Invincible to sit down and share his thoughts on the new Avengers trailer. The very same trailer we covered here ourselves last week.

I’m not too proud to say that he does a pretty good job at pointing out the cool but also dumb things that pop up in the 2 minutes of footage. So if you’re reading, Rob, (and you obviously are) give us a call. We’ll give you a regular column.

You can check out his thoughts on the trailer in the video below.