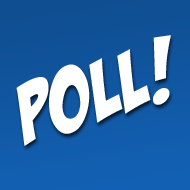 Well hello there! And welcome to the first of my polls on DOOM.

Every month, I’m going to survey you, our gorgeous and treasured readers, on subjects as wide ranging as geeky silly things to silly silly things. Yes, we take our questions very seriously.

Our first poll this month will be The Clash Of The ‘Tache as we pit famous moustache owners against each other in a popularity contest for the ages.

There are so many worthy opponents but I’ve whittled it down to my Top 6.

So who is your favourite moustachio man?

The English comedian has sported this 70s stunner for many a year now. His dedication to the moustache made all the more impressive by his trimming ability. Whether or not it increases or impares his comedy prowess remains to be seen but if his wife has let him keep it this long, he must be doing something right. First of all; LADIES, CONTROL YOURSELVES! Yes he is the hairy sex god Tom Selleck but he is also an actor of considerable respect. Sure, he may look a bit like a grizzly bear, but he also looks like a tiger in the sack. And by sack, I mean bed. I understand people don’t really sleep in sacks anymore but it’s just a phrase. He may be in his 70s now, and looking like well worn leather, but there was a time when Burt Reynolds was the man in Hollywood that men wanted to be and ladies want to make out with. Some men also wanted to make out with him too. It would be wrong of me to ignore that fact. Was his power purely in his face caterpillar? A relative newcomer to the world of the ‘tache, Dana has made up for his rookie status with flair, and enthusiasm. His glasses may sometimes make him look like he’s wearing a Groucho Marx mask but knowing Dana, that’s probably a look he was going for. Being a voice-over artist it won’t affect his career but will it affect your heart strings? Possibly THE moustache of our generation, Mario The Plumber is both a man of action and a man of romance, using his skills to kill turtles (not as cruel as it sounds) and save princesses. He may suffer from idenitity dissorders; a desperate need to inform us that “it’s-a me, Mario!” but we know there is only one. Is he your Number 1 moustache though?

So that’s your lot. Time to make a decision, who is your favourite moustachiod man?

The voting closes at the end of the month and I’ll announce the winner in the February installment of Poole’s Polls!

Clash of the ‘Tache