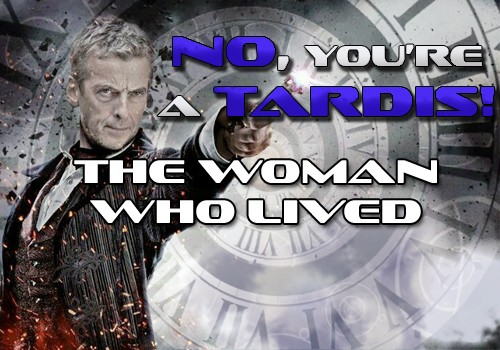 Review: Doctor Who – The Woman Who Lived

Maisie Williams knows how to Stand and Deliver an amazing performance!

Ah, c’mon! I had to get a pun in this review! The Woman Who Lived is the companion piece to the last week’s The Girl Who Lived but it’s definitely the stronger of the pair, with fantastic writing, humour and set pieces.

Catherine Tregenna is no stranger to Who lore, having penned some of the more outstanding episodes of Torchwood but, oddly, is only the second woman to write for Doctor Who proper since the revival (the other being Helen Raynor, who penned The Sontaran Strategem and Poison Sky).

Maisie Williams is on strong form this episode, delivering a really compelling performance. Her life after the Doctor is similar to that of many former companions but longer and more fraught with tragedy. Despite spending centuries waiting for the Doctor, it’s good to see that she wasn’t idle, gaining new abilities and experiencing new things. Like child death… Woof. Tough break, kid. Still, you make a hell of a highwayman.

Her question about loss is perfect for this scenario, one immortal to another. But while Ashildr (I’m not calling her Me, it’s good for a character but writing it as a reviewer reflects more about my working class upbringing than I care for) has become uncaring for human beings, the Doctor never has. He’s lost many Claras (literally in some cases) and they were all worth his time, for however long that was. Including…

SQUEE! Of course I marked out for Captain Jack! John Barrowman is a joy and I would love for him to return one day, perhaps even with Ashildr in tow? In terms of other guests stars, we have Ariyon Bakare as Leandro, in some awesome looking lion make-up. Hope they use this again because it looks great. We also have an unrecognisable Rufus Hound as Sam Swift! I was racking my brain trying to figure out who the actor was and it was good old Rufus. He did a fantastic job playing a punny highwayman.

The Woman Who Lived is a fantastic episode. Humour, compelling characters and just a solid story all around. I hope the series can keep this momentum going as we return to contemporary Earth and to UNIT with The Zygon Invasion.