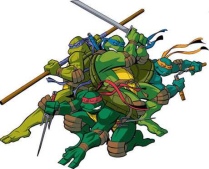 Febuary. FebRUary. Why is the R silent in this? Always drives me mad. I may pronounce it FebRUary for the month of FebRUary. ContRary to anyone else.

Rue airy… I’ve said it too many times now…

Anyway, this is the place on DOOM where you have your say and tell us what you’re thinking about a myriad of weird subjects.

Whether you’re right or wrong, you’ve got a voice.

Last month, we asked you which movie you were most excited to see this year and the clear answer was The Dark Knight Rises (closely followed by The Avengers).

What was also clear, and a little surprising, is that nobody is excited to see the new Spider-Man movie. Sorry Peter, but not one person voted for your new movie. Looks like you’re the loser once again. This month I’m deciding to settle an old argument between the DOOM staffers… Which mutant turtle is totally radical and which one is totally bogus, dude. Who Is The Best Teenage Mutant Ninja Turtle?

There will be tears by the end of this one…