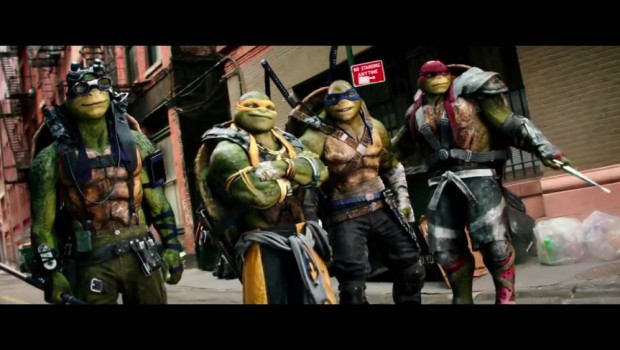 Heya Folks!  As the resident TMNT aficionado ‘round these parts, I’ve taken the duty of reviewing the new trailer for Teenage Mutant Ninja Turtles: Out of the Shadows out of the hands of you friendly neighborhood Aaron.  Don’t worry, I’ll let him out of the closet once I’m done.

Listen, we’ve heard all the criticisms; and while I’m generally more forgiving of it, I wasn’t the biggest fan of the first movie.  It did more things wrong than right, so understandably, there’s some trepidation going into this new outing.  So let’s take a look at the trailer and see if there’s even a glimmer of potential here.

Sorry, bad pun, get used to it.  I know this looks like unused footage from Avengers, but giant portals in the sky and flying alien craft could only mean one this in the TMNT universe…DIMENSION X!  They teased this in the first movie and now it looks like they’re delivering on what we’ve been waiting for  for over 20 years now, Krang in a TMNT movie.  As for those flying ships, I’ve heard interesting theories that they may not be ships, but in fact smaller pieces that will combine to form the Technodrome!  Oh hell yes. The first TMNT movie was…kind of a mess tonally.  It looks like it started off more gritty and serious, but somewhere along the way, the decision was made to make it lighter and comedic.  Being that it was a hodge-podge of different scripts, that’s kind of understandable.  But this movie seems to be settled on a more fun and colorful tone, which is fine by me seeing as how the more humorous elements were the best parts of the first movie.  TMNT always works best when it’s not taking itself too serious, and this movie has sewer-lid launching trucks and mutant rhino riding a tank through water to shoot at mutant Turtle men.  They’re clearly throwing reality to the wind and I’m all for it. The biggest complaint lobbed at the first movie was the way the Turtles looked.  They said they were too ugly and weird looking.  Because god forbid giant mutant Turtle men would look weird.  This movie they mostly look the same, but there have been some pretty notable tweaks.  Their noses look more Turtle-like and the hue of their skin looks brighter.  Mikey in particular looks…almost cuter.  Honestly I never had a problem with the original designs, but I’m glad they tweaked them. Speaking of new faces, Steven Amell takes a break from playing vigilante Oliver Queen to stretch his acting chops to play vigilante Casey Jones.  This is my only real concern about  the movie (okay, not my only concern, but the biggest).  Casey Jones is supposed to be kind of grungy guy who’s kinda nuts.  In a world of mutants, robot ninjas, and alien brains, Casey Jones is the weirdest element.  He’s just a guy with a hockey mask and baseball bat taking on the world.  Amell looks a little too clean cut and down to Earth.  But to his credit, he’s not a bad actor and he supposedly had really good chemistry with Megan Fox, so I’ll give old boy a chance. Shredder is back, but this time he’s not just an unnamed and uncredited Asian actor brought in to replace William Ficthner because of fans calling “RACISM”!  This time he’s played by a very visible Brian Tee, who honestly looks pretty badass.  Karai is back as well, this time played by Brittany Ishibashi.  Since they went to the trouble of recasting the role, hopefully this means they’ll actually have her do stuff this movie.   Plus, we have three villains making their long awaited TMNT movie debuts.  First up is Baxter Stockman played by…Tyler Perry.  I was…initially conflicted (by that I mean infuriated) at this casting choice, but all that Madea stuff tends to overshadow the fact that Perry can actually act, and when he goes all in, he goes all in; and he looks to be going all in to the whole “mad scientist” thing for this role.  As long as he doesn’t put on a dress, we’ll be good.  Which leads us to the next two…. Oh yeah…this is my jam.  After 25 years; After waiting so long; After being denied in Secret of the Ooze…Bebop and Rocksteady are live and in the flesh.  Well…CGI, but still.  IT’S BEBOP AND ROCKSTEADY!  I know it seems weird to gush over the two dimwit henchmen from the 80’s cartoon who were honestly never that deep, but still, the characters mean a lot to us fans.  Played by human form by comedian and voice actor Gary Anthony Williams (Uncle Ruckus, y’all) and Stephen Farrely (aka WWE World Heavyweight Champion…sigh…Sheamus), respectively, the two look to be very much in true to their original portrayals.  2014-2016 seems to be the Bebop and Rocksteady Renaissance as the two have been given new life in both the current comic series and cartoon.  Now they look to make it a trifecta.  Expect them to be the highlight of the movie. Overall: It’s too early to judge if they’ve fixed all the mistakes with the previous film, and I’m trying not to give in 100% emotionally…but god DAMN that trailer got my hyped.  They knew just what to show and kept a strong energy throughout.  If this movie is the insane, balls-to-the-wall, pure fun action-comedy I’m hoping it is, then we may have just gotten a taste of the best Ninja Turtles movie, yet.