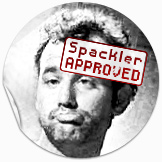 Just who wrote this movie’s tagline?! #1

Something new we’re trying on DOOM! We’ve all seen them, those sometimes-witty, sometimes-spine-tingling one liners stencilled on every movie poster released around our little snow globe. Some irk the reader, some bemuse. Some out right fib. Once a week, we’ll be awarding one special movie tagline Doom’s very own Carl Spackler approved award for outright silliness. Know of a particularly bad tagline and want to share it with us? Send it to hello@thewebsiteofdoom.com and we’ll share it with the world!

First up: Alien Vs. Predator Tagline: Whoever wins… we lose.

Spackler awarded because: We actually win.

Well, we win in the film. Anyone who watched this film lost, both time and soul wise.