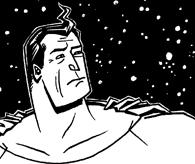 2011 has come to a close, and we have all been waiting with bated breath for some VB related news. We know Doc Hammer and Jackson Publick are writing season 5, and getting it ready for production, which should be in the coming weeks.

So while you are waiting for new episodes, check this out! Jackson updated his blog with a bit of holiday cheer in the form of a re-gift! From December 17th-20th, Jackson posted some old comic art he drew for the comic anthology Monkeysuit, along with a piece he made for the exhibit “Too Art for TV Too”, and another piece for a comic themed show called “Agents of P.O.O.C.“.

Monkeysuit was a comic anthology that ran from 1999-2005. It featured many animators that may sound familiar to you, as some of them went on to work on the Venture Bros., including Jackson, Doc Hammer, Douglas Lovelace (Storyboard revision supervisor, storyboard and design), Chris George (Character design and storyboard revision), and Stephen DeStefano (Art director and storyboard artist, voice of Dr. Entmann). The “Too Art for TV” exhibit is curated by Liz Artinian, who you may know as the color supervisor for the Venture Bros. The “Agents of P.O.O.C” show was held at Maxwell’s in New Jersey and was curated by Karl Heitmueller.

And finally, Re-Gifting (pt. 4) contains two Spider-Man themed pieces; “An Ideal Web” from the “Agents of P.O.O.C.” show, and “Parts of the Body” from “Too Art for TV Too”.

If you like what you see, you can pick up all the issues of Monkeysuit on Amazon. So go check it out! Also, if you live in the Los Angeles area, and you’re interested in seeing some pretty cool Adult Swim inspired art, including The Venture Bros. of course, Gallery 1988 is holding a group exhibition starting on January 13th- February 4th. More info can be found here.