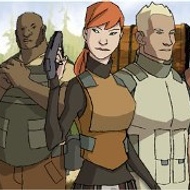 Will the evil studio drones who are intent on destroying creativity and originality claim victory? Or, my review of “The State of Creator-Driven Animation”

Recently I read an article on the website Cartoonbrew.com, written by animation columnist and historian Amid Amidi. He goes into great detail explaining that, with the rise of the new Discovery network The Hub, we’ve come to the end of the creator-driven era of television animation that has lasted since the 90’s when greats like Bruce Timm, John K., and Mike Judge burst onto the scene. Now, studios prefer only tried-and-true products, shows based off pre-recognizable brands’ properties and re-packaging of classic properties. While that’s smart in a business sense, it’s like a shot in the heart to both established and up-and-coming animators eager to get out there and create something uniquely their own. Amid described this as the death of a creative and innovative period of animation, and while in some respects it kinda is, I see this as more of a temporary setback.

Remember back in the 1980’s, yes I know, that was a loooooooooong time ago, anyone who remembers that period of time must be in a retirement home by now (I kid, I kid, please keep reading, ya old fogeys), the biggest cartoons of the time were shows like G.I. Joe, Transformers, Thundercats, and Teenage Mutant Ninja Turtles. A lot of us look back fondly on those shows and think of them as shining examples of when cartoons were good, but let’s be honest, they were all crap. Every one of them. There wasn’t one person with a vision driving those shows, they were controlled entirely by both the studios producing it and the toy companies banking on it. It was a really dark period for animation. Original material came few and far between and any that did show up was mostly under the radar. Animation didn’t have the same prestige it had back in the golden era, and therefore wasn’t seen as all that profitable on its own. It wasn’t until the early 90’s when the sudden boom in animation happened, that we started to see original material from talented animators who saw an opportunity and went for it. John K. and “Ren and Stimpy”, Genndy Tartakovsky and “Dexter’s Laboratory”, Savage Steve Holland and “Eek the Cat”, Joe Murray and “Rocko’s Modern Life”, the list goes on. Granted, it started to die down by the mid 2000’s, leading us to where we are now. Basically what I’m trying to say is history is repeating itself.

Look at The Hub’s original programming; G.I. Joe Renegades, Strawberry Shortcake’s Berry Bitty Adventures, Transformers: Something-or-other, My Little Pony: Sparkling Gay Rainbow Orgy. Not to mention there will soon be retreads of Voltron, Thundercats, and Ninja Turtles, all with toy lines sure to accompany it. This is a return to the 30 minute toy commercials that once made up the Saturday morning cartoon. Also, we’ll soon be seeing cartoon adaptations of Kung-Fu Panda, Green Lantern, and Napoleon Dynamite, all to cash in on familiar franchises. We’ve gone back to that period of time were studios are only looking to use what they’re sure will work. What we’re seeing seems like a return to the dark ages of animation, a return to the bland and the uninspired. But fear not, for I see some vestiges of hope.

While it’s true the creators movement has died down considerably, it’s not totally gone. Cartoon Network, who played a huge role in the 90’s introducing us to new animators like Genndy, Craig McCracken, Van Partible, and John Dilworth through the “What a Cartoon! Show”, continues to keep that same spirit alive. Granted they have been pushing more live-action programming, but the success of those has allowed them to produce more original programming like J.G. Quintel’s “Regular Show”, C.H. Greenblatt’s “Chowder”, Pendleton Ward’s “Adventure Time”, and the animation group Man of Action with “Generator Rex” and the “Ben 10” franchise. Not to mention Genndy Tartakovsky’s “Sym-Bionic Titan” to which I gave a glowing review in the previous column. While some of these shows haven’t exactly been masterpieces, they’re proof that there is still some life in creator driven works. Will they reach the heights that shows like Powerpuff Girls and Ed, Edd, n Eddy reached? Maybe/maybe not. Whether or not they have that same appeal is up to audience, who I trust is still showing their support.

Amid goes on to say that the future of animation lies in the independent circuit. Indeed with such new venues as YouTube and the growing number of animation festivals, rising animators are able to showcase their individual talents and make a name for themselves among their peers. Though, while I fully support the independents, I do hope to see some crossover into the mainstream. There are a lot of talented animators out there that deserve as wide an audience as possible. I’m currently studying animation at Santa Monica College, and I’m surrounded by this pool of talent, just waiting to start tearing it up in the big leagues.

Animation went through a dark period in the 70’s and 80’s, and what happened? We saw a wave of new talent pull us out of that and into a great era of animation. Currently things are starting burn out, but like a Phoenix (not Jean Grey), I predict that we’ll soon see a new era of talented animators producing original material for the next generation to become inspired by. Animation is an amazing art form, we can’t let it be corrupted by imagination-starved studio execs who can’t draw stick figures. I didn’t write this to tear down Amid Amidi’s article. As I‘ve said, he makes a lot of good points and for the most part I agree with him. However, I’m trying to look at this through more hopeful eyes. Things look bleak for now, but soon, all will be well.

Here’s the link to the article that inspired this, by the way.