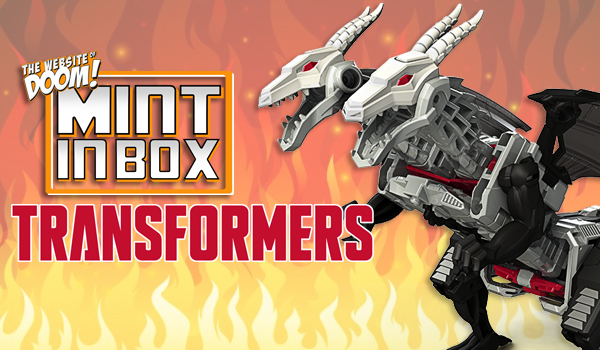 The amazing Titans Return line continues and not content with reviving the Headmasters, Targetmasters and Powermasters of yesteryear, the line has taken a swift right into the bad part of town that is home to the bizarre assortment of 1987 robots known as the Monsterbots. Twinferno (aka Doublecross) is one of the Monsterbots, an Autobot trio that makes the Dinobots and the Wreckers look positively friendly by comparison.  His comrade Repugnus makes an appearance in the low-price Titan Master assortment so we may be seeing the trio complete before the line is done. Twinferno’s beast mode is an awesome two-headed, bi-pedal dragon — ala King Ghidora. The twin heads have a decent array of movement since they’re also pulling double duty as arms in robot mode, allowing for some cool poses! Unfortunately, the tail refuses to stay together via friction and had to be forcefully compressed together for the photos. Partnered with Twinferno is the Titan Master, Daburu. His name is derived from the Japanese pronunciation of Double and his nicely sculpted robot form is a homage to White Leo of the Battle Beasts/Beastformers, a toyline with close ties to the Transformers in Japan. Daburu can ‘pilot’ Twinferno via several mounting points on the dragon mode which is pretty neat. Being a Titan Master, the pair can combine to form a singular robot and Twinferno’s head is a really handsome visage, if a little plain. Twinferno stands a little shorter than the other figure I have from this line, the previously reviewed Mindwipe and can even swap heads as part of the signature cross-play pattern. As a solo figure, he definitely cuts an impressive silhouette and looks like a proper boxy brawler. He has a decent range of articulation and can do a fair Rider Kick and even be a pretty ballerina! The twin cannons that were previously mounted on the dragon mode’s back can be wielded in robot mode as either shoulder cannons or by attaching them to the side of his dragon face hands. Twinferno was one of my highly anticipated figures from the Titans Return range and I’m happy to say that this figure does not disappoint! He’s an absolute blast to play with and I highly recommend picking him up for yourselves.