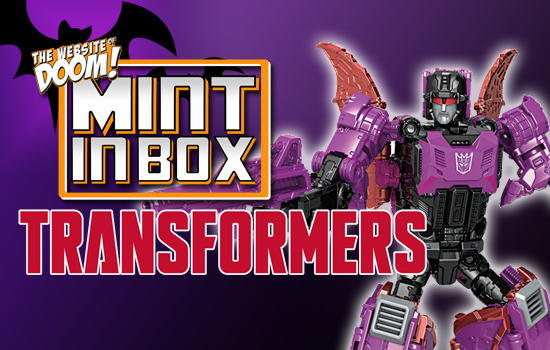 After too long in the dark, the beastial Decepticons of the Headmaster era return in the aptly titled Titans Return line and today we’re looking at the master of hypnotism; Mindwipe! Mindwipe is a superstitious and cowardly ‘Con, the Transformers equivalent of a Ouija board enthusiast who desperately wants to communicate with the dead. Quite a macabre character bio but it soon devolves that into sitcom shenanigans when he’s paired with his scientifically-minded Titan Master, Vorath. Mindwipe’s bat mode brings to mind the Ricky Gervais bit: Have you been over-feeding a pipistrelle? because this is a proper chubby bat. The wing span is epic and has amazing articulation, befitting of such a creature of the night. His gun/shield kibble tail is a bit slapdash though (Oh! Oh! Can we get a Titan Master Slapdash?) Just like an evil Kinder Egg, Mindwipe has a prize inside and it’s none other than Vorath! This 1½ inch head on legs has a surprising amount of detail but sod all paint work (but that’s why people fork out for the Japanese ones) but that’s fine because it’d only get chipped in the process of inserting his tiny head into Mindwipe’s neck hole over and over again. That’s way grosser than I intended… Vorath can ‘pilot’ the weapons in their gun… sled… configuration. My one complaint about this line is the forced inclusion of rubbish ‘vehicles’ in the Deluxe figure range. The conversion process is lovely and intuitive, the bat wings folding into nice boxy legs while his stumpy legs unfurl for the robot mode arms. Scale-wise, Mindwipe stands at a little under 6″ tall. While that isn’t quite as big as you’d expect but for what he lacks in height, he makes up for in quality. Ooooooh myyyyyyy! I think I might be turning robosexual with this figure because DAMN, Mindwipe looks gorgeous. The colour palette is like a pimp’s finest suit; blacks, reds, subtle browns and the same sexy-ass purple I have on my bedroom walls! The proportions are full of satisfying chunk and tight joints. You can pull off a great range of poses but there’s no ankle articulation so his legs are constantly in a wide stance. His weapons includes an update of his trademark Viper Pistol and the clawed shield dealie which will probably end up in a box somewhere… Mindwipe’s return to the Transformers line is much appreciated as his figure is the best Transformer I’ve messed with in a very long time and after this initial hands-on experience, I will definitely be trying to hunt down both Skullsmasher and Wolfwire to complete the trio. I want to give a super-special-awesome shout-out to Dawfydd Kelly for sending this figure to me out of the kindness of his heart though considering how now I want more, he’s more like a plastic crack pusher…

Anyway, thank you for checking out my review and I’ll catch you guys next time with another Mint in Box!