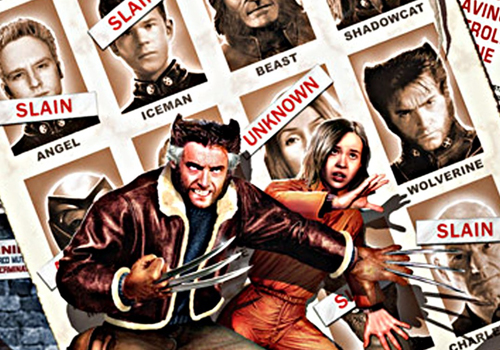 Bryan Singer returns to save the X-Men franchise but with a little help from not one, but TWO X-Men teams in a race for survival across space and time. Are you hyped yet?
< !-more->

X-Men: Days of Future Past, based on the classic Byrne/Claremont story of the same name, is a fantastical beast in concept. It’s a sequel to both the original X-Men trilogy and also a sequel to X-Men: First Class. Uniting the two casts was an awesome idea and the hotly anticipated trailer lives up to that notion as we see the darkest chapters of the X-Men, both past and present. Take a look!

Let’s get the Hugh Jackman out of the way and say DAMN, he looks good with greyed temples. The basic premise has this older Wolverine is transplanted into the body of his slightly younger self in the 70’s to inspire a disillusioned Xavier (James McAvoy) to avoid disaster. To quote Maria Hill in Battle of The Atom: “God, when did Wolverine become the reasonable one?”

“The X-Men ARE the assassins!”

As well as young and old versions of X-Men we’ve seen before, we also get a bunch of fan favourites to round out the numbers, chief among them being Bishop, time travelling X-Man of justice. Not much is known about his character so far other than he’s a “guy from the future who fights for survival” according to his actor, Omar Sy. Along with him we get shots of who I believe to be Sunspot, Warpath and the reality-hopping elfen Exile known as Blink (Fan Bingbing)

Bolivar Trask, played by Game of Thrones‘ Peter Dinklage, is presumably the primary antagonist of the movie as he is the creator of the Sentinels, an army of mutant-hunting robots. He’s an interesting casting choice but I have no doubt he has the chops to play a bitter, hateful character. One thing I’m sad about is that there’s a noticeable lack of giant purple robots in the trailer but from behind the scenes shots, they look pretty cool!

Here’s the shot many were waiting for. The thought of McAvoy and Stewart in a scene together whets my appetite for the movie and is a perfect way to top off the trailer. The younger disillusioned Xavier and the older, wiser and hopeful Xavier in a battle of wits and words. Wait, didn’t Stewart’s Xavier die in X-Men 3? OOOH, MYSTERIOUS!

Between an all-star cast, a great director and an interesting premise, this movie is shaping up to be one of the best X-Men movies to date! X-Men: Days of Future Past is due for release May 23, 2014.