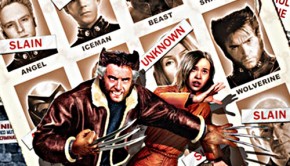 Bryan Singer returns to save the X-Men franchise but with a little help from not one, but TWO X-Men teams in a race for survival across space and time. […