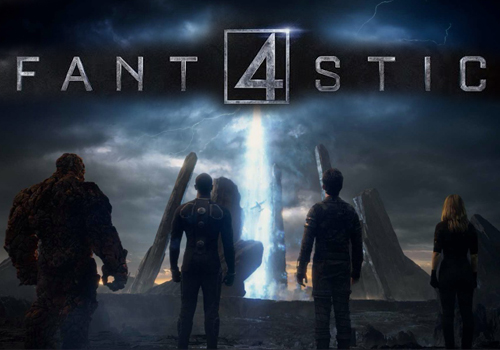 The Fantastic Four. Marvel’s First Family; Reed Richards, Sue Storm, Ben Grimm and Johnny Storm were forever transformed by cosmic rays into the Fantastic Four! There’s been one failed attempt at a movie, two more that weren’t great and now a brand new reboot from director Josh Trank (Director of the fascinating Chronicle) and written by Simon Kinberg (Writer of X-Men: The Last Stand, Days of Future Past and Star Wars: Rebels). Can these two bring us a unique and awe-inspiring take on the Fantastic Four? Here’s a hint:

Highlight of The Trailer

It does not bode well when the Marvel logo (not even the fancy new 3D one) elicits the biggest smile for the next 2 minutes. And what’s with that narrator? I didn’t know Tony Todd was in this movie! (Spoilers: He’s not. Boo-urns.)

Here are your Fantastic Four! These young pups are the latest heroes on the scene, given “daunting” new powers after teleporting to a parallel universe. Hoo boy. Let’s run down these cats. Miles Teller (Reed Richards) is known for starring in Divergent, so he’s right at home here, it looks like the same movie. Kate Mara (Sue Storm) was a US Marshal in Iron Man 2 and that’s the only thing I’ve seen her in. Michael B. Jordan (Johnny Storm), despite the backlash against his casting, seems like a solid actor plus he was in The Boondocks so that wins him points with me and finally Jamie Bell as Ben Grimm. Billy Elliot is The Thing. I don’t even need to make a joke, it writes itself.

We all know the powers of the Fantastic Four by now so how do they look from what little we see? Not too shabby! We don’t get much (Johnny being the most notable) but Reed looks stretchy without looking like ropey CGI, Sue seems to have a similar effect to Jessica Alba but it’s invisibility, what can you do? Johnny’s flames are a little more subdued than Chris Evans but that’s not a bad thing and The Thing is not a rubber suit. That’s all I can say because there’s TWO shots of him.

Admittedly, that does look cool. (If a little Mass Effect-y.)

The teaser gives us nothing in terms of plot, just a lot of shots of science and military men looking stern while the narrator tries to make is overdose on gravitas but we get plenty of shots of the heroes and that’s that. I’m probably not going to see this. Mildly interesting familial dynamics and different takes on power sets I’ve seen before aren’t enough to draw me in but we’ll see what the general public things when The Fantastic Four hits screens on August 6th 2015.