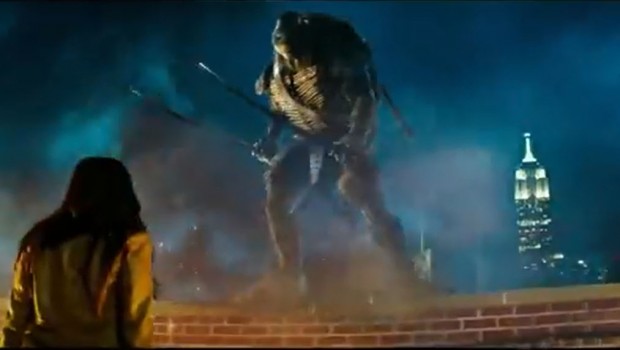 Website of Doom, it’s been far too long.  Yes I, Ballsmonkey, am making my glorious return to this illustrious website.  But what would possibly compel me to come out of my writing hibernation, you ask.  Why the FINALLY REVEALED TRAILER FOR THE UPCOMING TEENAGE MUTANT NINJA TURTLES MOVIE!  Duh.

I’m known amongst my peers as somewhat of a Ninja Turtles connoisseur, so my merciful overlord Aaron has graciously allowed me to cover it for this new installment of Tease Me, Baby.  And truthfully I’ve been waiting for a long while to cover this.  Ever since this movie was announced way back when and Michael BayBLAAA!!@#@#$*KILLRAPECHILDHOODBLAAAAAARRGH!!!

….Sorry, that seems to be the general reaction most people have to his name….and Michael Bay was attached as PRODUCER.  Not director, though this trailer does have a few certain Bayisms.  Needless to say I’ve been curious as to what this movie was gonna look like.  I try not to cry suck at movies before I see them, but with the inclusion of the guy who directed Cash of the Titans being at the helm, I’ve adjusted my expectations accordingly.  But enough jibba jabba, let’s dive into this shell-first.

–WE’VE BEEN WAITING FOR YOU MISS O’NEIL

Here we have multi-time Academy Award viewer Megan Fox playing TMNT mainstay April O’Neil.  Her attachment, too, was met with similar rage, but honestly I think she’ll do okay.  April’s role has never been too complex and layered, especially if they’re going by the old cartoon which it looks like they are given that she’s a reporter in the flick.  She’s feisty, adventurous, loyal, and get’s kidnapped a lot.  From all the behind the scenes stills she seemed to be enjoying herself, and reportedly she lobbied hard to get the role, so as long as there’s some personality injected into it, she’ll be fine.  Besides, it’s the Turtles we came to see, so they should carrying the lions share of the film.  Speaking of which…

-THE TURTLES PUCKER UP

Here’s our first true look at the Green Machines in full motion.  From what little we saw, their personalities remain intact (Thank God).  The real differences come in their physical appearances.  These Turtles are…jacked.  They’re big, bigger than ever.  Traditionally they’ve never gone past 5’10, but these Turtles tower over humans and make big thud noises when they land, which given the new origin (which we’ll get to in a bit) and producer, it makes “sense”.  They’ve also seemed to have taken a cue from the new TMNT cartoon and given the Turtles different body types.  Leo has the typical hero physique, Raph is more muscular,  Don is the tallest and lanky, and Mikey is the shortest.  That I really like.  The Turtles also have different attire.  I’m guessing that was done to make them even more distinct than incarnations in the past.  Given that we’ve seen literally thousands of Turtles figures of them wearing battle armor, sports gear, farmer overalls, etc…this isn’t anything new.  Onto the face, the Turtles have…*GASP* LIPS!  …Has the world ended yet?  Nope?  Yeah, go figure.  Honestly the lips aren’t a problem.  I can’t say this for sure, but I’m guessing the lips just made the mouth movements a lot easier to animate.  A human-like mouth is definitely easier to manipulate than a turtles beak.  So the lips, not an issue.  The nose, on the other hand, just looks dumb.  I don’t know why they did this.

This seems to be a holdover from that god awful script that leaked a year ago.  The Foot are less ninjas now and more black ops soldiers.  Which as I stated before, given the new origin and producer it makes…”sense”

So yeah, The Shredder, traditionally Japanese archenemy to the Turtles and Splinter, here is played by traditionally NOT Japanese actor William Fichtner.  This was the bit of casting that made me scratch my head.  But at least the good sense not to put him in yellowface.  He’s playing a new iteration of the character named Eric Sachs.  By the look of that painting he seems to be inspired by the Japanese, though…

-THE MORE THINGS CHANGE, THE MORE THEY DON’T ACTUALLY CHANGE ALL THAT MUCH

So the biggest reveal of the trailer is that the Turtles, who look to still be mutants and not aliens so put your pitchforks down, nerds, owe their existence to Sachs and *DUN DUN DUUUUUN* April’s Dad!  This new origin…isn’t really THAT new.  At least if you paid too much attention to the TMNT franchise like certain people that totally aren’t me.  I have a life….

Shredder being responsible for the Turtles creation isn’t at all surprising seeing as how he’s always been either directly or indirectly responsible for their existences in every incarnation.  Hell, in the 1987 cartoon he was the one who exposed them to the mutagen (which this movie correctly labels as TCRI and not TGRI).  As for April’s dad being involved, yeah that’s an interesting little twist, though the new IDW comic has seemingly beat them to that, at least in terms of getting it out there.   When it comes to new origins, nothing gets more radical that the IDW comic origin (which involves genetic modification and reincarnation), so this one in the movie is pretty par for the course.  What this doesn’t explain is how Splinter fits into this.  I’m mentally preparing myself for the possibly levels of stupidity this may go to.

Like I said before, the Turtles personalities seem to be in tact.  There’s a nice little bit where Don whips Raph shell first into a truck in their way, yelling “BATTER UP” beforehand.  This is good indication we’ll get some classic Turtle wisecracks going.  Which is a relief.  They should not try to go full on serious with this.

What is interesting is that we don’t see what’s actually causing the destruction.  Which could either be saved for a future big reveal, or it might just be that in Michael Bay’s world things randomly blow up.

Overall: The extreme secrecy of the movie all this time had me worried, but this new trailer gives off…very slight hope.  As long as they have a good balance of action and comedy, they’ll be able to capture the feel of the original Turtles cartoon nicely.  It’s easy and understandable to be apprehensive about this, and you should, but there’s always hope.  As long as the movie is at least dumb fun, it’s done it’s job.

But above all else remember this, the Turtles have been around for 30 years now.  This movie won’t kill the franchise no matter how sucky it may turn out.