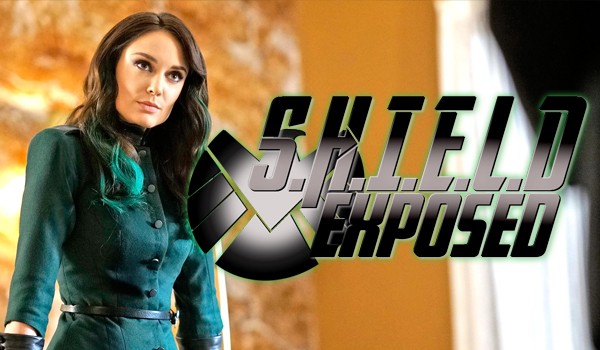 Man, it feels like an ice age since I last covered this show… So much so that I actually needed that recap to remind me where we were with the current arc. Hell, I even forgot who Vijay Nadeer was until I looked it up after the show finished.

But yeah! It’s a brand new world where HYDRA rules and Inhumans are persona non gratis and all the character we know and love are assholes! Yaaaaay! The episode title What If… comes from a series of Marvel books that explore alternate Earths where the stories you know didn’t turn out like the should, hence we have this alternate Earth where HYDRA revealed itself early and became the world’s security task force. Should make for some interesting scenarios!

Did I say interesting? I meant awkward as fuck! Brett Dalton returns as Grant Ward and I hate his stupid, handsome face already because in a total reverse of the real world, this Ward is the GOOD GUY! Still, at least Daisy’s awkward love life isn’t as bad as Jemma being buried alive! Tough break, Simmons.

Hell, Simmons probably gets it the worst this episode. She has to dig herself out of her own grave, is on the run from HYDRA, fails at persuading Coulson he’s in a simulation and, while not currently aware of it, lost Fitz to Madame Hydra aka AIDA! The girl just can’t catch a break.

While we don’t see everyone, we do get the majority and some interesting lore about this world, like the Cambridge Incident, where the Inhuman girl May saved killed a bunch of people and lead to the rise of HYDRA. I wonder what this Alt-Earth’s version of the Avengers is like…

We end the episode with Daisy confronting Coulson and breaking through the programming enough that Coulson knows her name. That’s a good start to a really interesting plot line and we’ll be seeing more next time when we analyze Identity and Change.

(Quick note to Flash Facts readers; the review for Abra Kadabra will be up later this week, don’t worry!)