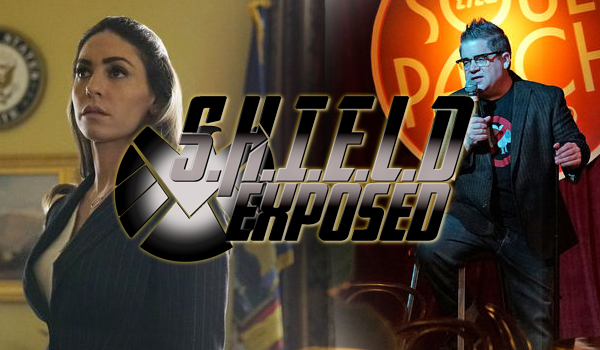 Sorry that I’m having to play catch-up again so soon after the last one but if you followed me on social media, you’d know I went to Toy Fair and the TV reviews kind of lapsed (the bane of being the only DOOMie watching these shows is that no one can cover when I’m gone) but we’re back and first up is Wake Up, an adventure in spy craft and mind palaces!

It’s great to see Natalia Cordova-Buckley return as Yo-Yo, she brings so much sass to the cast and it’s fun to see her play off Henry Simmons’ Mack. We get to see Yo-Yo engaged in a bog-standard SHIELD mission, infiltrating Senator Nadeer’s office while Quake is put before a tribunal, and we also see her relationship with Mack develop a little more but, naturally, this plays second fiddle to the A and B plots.

We see inside May’s head to the new program that Radcliffe established in the last episode and it really does play into her character. Once confronted with the bizarreness of her situation, she immediately goes into fight mode and runs a gauntlet against AIDA in her mind. But the real heartbreak comes from the reveal of the final scenario, one Radcliffe rips right out of May’s past and abuses wholesale; rescuing the Inhuman girl she tragically killed in Bahrain. That bastard is going to get his shit pushed in so hard…

Whoa! Not a bullet to the head, Fitz! Luckily, it’s revealed that the Radcliffe in custody is also an LMD but less lucky is that Radcliffe is actually in cahoots with Senator Nadeer… Hoo-boy, things look pretty bad for the team but don’t worry…

Because the Koenigs baaaaack! We haven’t seen Patton Oswalt since, like, Season 2! Billy and Sam are part of Coulson’s plan to deal with the Darkhold. This also involves the FOURTH Koenig brother, the conspiracy nut Thurston, and the Koenig sister, JT, who is an unadulterated badass!

We also get the Philinda kiss we’ve been waiting for that is immediately undercut but LMD-May’s betrayal when she gets her hands on the Darkhold. Fair play to the writers for not having LMD-May become more like AIDA once she had her objective but was May but with no control of her actions. She might not be “real” to everyone else but she’s May through and through, visibly hurt that she has no control over her actions or the implication that she’s nothing more than a shadow of the real thing.

These two episodes, especially Hot Potato Soup, were thoroughly entertaining and with LMD-May revealed and the Darkhold in the hands of the enemy, the team is going to have their hands full next week when they come face-to-face with AIDA’s inspiration as well as dealing with an explosive Inhuman in BOOM.