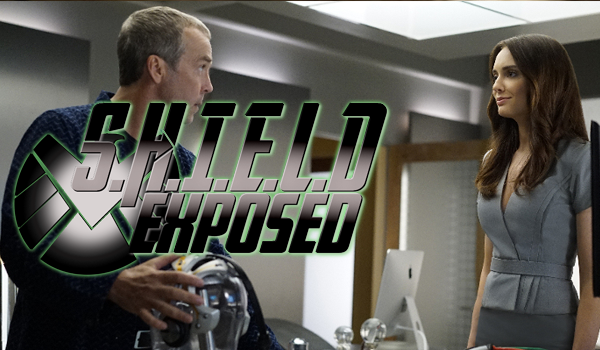 Okay, more of a subtitle for an arc but still… Plus it sounds super-generic. And that’s probably the best way I can describe the episode. Generic.

Not that Uprising is bad, per se, but it’s plot is weak sauce. Oh, an Inhuman attack leaves a half-dozen cities without power because of the registration act, but it’s not an Inhuman attack but a scheme by the Watchdogs to frame Inhumans. So why are their demands to stop the registration of Inhumans when the Watchdogs are using a leaked version of that list to hunt Inhumans down?

Say the world governments complied; what then? Inhumans go back to being anonymous and thus harder to find? How does that help the Watchdogs?

Why is Anti-Inhuman senator Rota Nadeer declaring Inhumans to be a menace on TV, leaking the list to the Watchdogs while having her seemingly Inhuman brother remains chrysalised in her living room? As Val Kilmer said in Batman Forever; it just raises too many questions.

Still it’s always nice to have an excuse to have Natalia Cordova-Buckley to reprise her role as Yo-Yo and be a cheeky sprite onscreen, even if it means arguing with Mack over her involvement with Daisy.

Speaking of, over in her neck of the woods, we get to spend some time with Robbie’s brother, Gabe. Unlike his comic counterpart, this Gabe doesn’t suffer with developmental disabilities and is only in a wheelchair because of some random gangbangers. That kinda sucks because Gabe’s severe handicaps were what made Robbie’s dedication to do right even more compelling but hey, it is what it is.

We also learn how to cure someone of the Darkhold infection thanks to Simmons and Radcliffe; kill the patient! Okay, so a hard reboot often is the best solution to problems but that’s usually for technology, not biology! Good thing Radcliffe used AIDA’s power battery to revive May but that may tip off Simmons to her existence also.

Jeffrey Mace continues to be way too nice… I can feel the heel turn coming. Still SHIELD is now back in the light and they can operate openly once more.

Really struggled with a review for this one because it’s pretty middle of the road. Hopefully I’ll have more to say next week when SHIELD finally come face to skull with Ghost Rider in Let Me Stand Next to Your Fire.