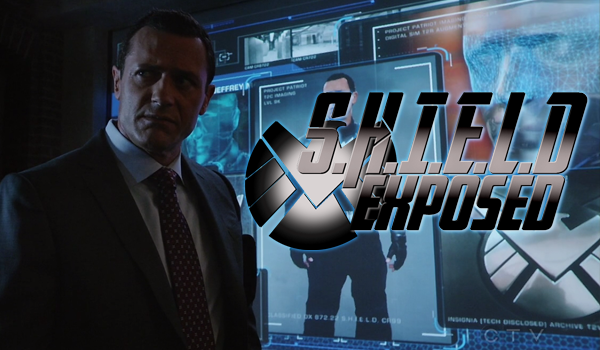 It’s not out of the realm of possibility, right? I’m seriously questioning his motives right now, more-so than RoboMay and she’s a confirmed LMD.

The Patriot, naturally, focuses on Jeffrey Mace and his secret origins but before I talk about that, let’s check in with the other plot lines…

Isn’t it a bit cliché that May’s mind rejects the tranquil simulation because “she’s a warrior” and she craves battle? Didn’t they use this exact excuse in The Matrix? Ah well, at least she got a few good hits in before being put under again. Meanwhile, her LMD has discovered her nature and is visibly perturbed. Are we going to see RoboMay rebel against her programming and we’ll have a May/May team-up? I’m guessing yesssssss!

The dynamic between Radcliffe and AIDA is also worth noting because if he keeps being snippy with her, she’s liable to murder his dopey arse. She’s killed for less!

We also get a fair amount of time with a returning Talbot (always a pleasure to see Adrian Pasdar) and FitzSimmons as they try to break an ex-Hydra assassin. It’s good to see Elizabeth Henstridge to play a little darker than sheer white every now and then. Simmons needs to challenge authority more.

Now, the meat and potatoes of the episode is the reveal that Jeffrey Mace is a fraud. After a carefully choreographed attack on Mace — including the first AoS appearance of the Judas Bullets from Luke Cage — Mace, Coulson, and Mack find themselves outnumbered and outgunned by a platoon of Watchdogs. As a result, Mace is revealed not to be an Inhuman at all, instead an enhanced human using a modified version of the Hyde Formula. I was kind of pulling for the same drug that IGH was using in Jessica Jones but I guess this works as a continuity nod too.

So yeah, Mace literally tripped into the role of a hero and has been playing it at the behest of Talbot and the Government. Credit to Jason O’Mara for a few more comical expressions and an incredibly earnest performance near the end as we see a more vulnerable version of Mace. With his secret out, Coulson naturally steps up to run ops from now on but only if Mace remains the face of S.H.I.E.L.D.

I really enjoyed this episode. It had a nice balance between all the plot lines, had a few decent gags and some cool action. Be sure to come back next week when we see AIDA’s plan expand further and May’s need to Wake Up.