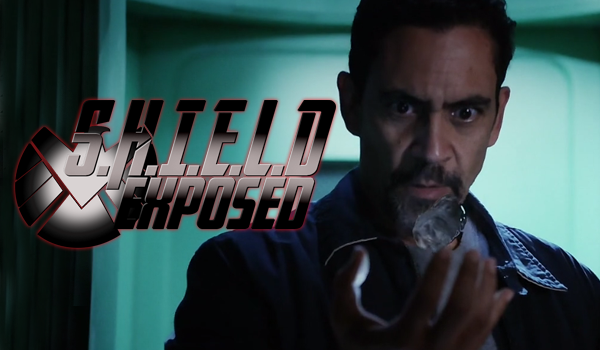 You know I’m going to talk at length about it. If you’ve seen the episode, you know I can’t not talk about it so let’s get some other plot points out of the way, yes?

Simmons’ secret mission for the Director can’t be as sinister as it appears, right? I mean, that’s clearly a red herring based on the hush-hush meeting between Mace and Senator Nadeer. I think what that meeting was really about was Nadeer using a little blackmail to get SHIELD’s discreet help with the Inhuman family member still cocooned in her living room. Could be wrong but we’ll just have to see how it plays out.

We finally get to see the origin of Robbie’s ghostly riderness and while it’s a massive departure from the comics canon I really don’t mind it, especially given how it ties in with the back story of Eli and the Darkhold. Having Eli take a severe heel turn in this episode was great, especially after making him seem like a really good uncle to the Reyes boys.

Not so great is him going Full Metal Alchemist and Coulson, Fitz and Reyes seemingly vanishing without a trace. Equivalent exchange nonsense? Quite possibly! I also like that the utterly boring Season 2 story line from Agent Carter is getting some play in this episode with Momentum Labs being a subsidiary of Roxxon Corporation who bought up Isodyne and all their research on the Darkforce. Bringing that stuff into the modern age can only mean some more metahumans!

But I’ve waffled on about other things for far too long so lets talk about the biggest plot point of the episode.

HO-LEE SHIIIIIIIIIIIIIIIIIIIT!!!! Robbie Reyes isn’t this universe’s first Ghost Rider! The appearance of who we assume is Johnny Blaze means there is/was more than one Ghost Rider and our boy is a Legacy hero! Booyah!

Could his appearance in Robbie’s origin be more than coincidence though? Last time I postulated that the Darkhold was buried under Johnny Blaze’s basement so was he on the way to recover it when Robbie called out for vengeance? It’d be great if I was right but either way, it is kick-ass to see the original Ghost Rider on the show and, hopefully, we’ll be seeing a team-up with both Spirits of Vengeance! God, I hope so.

Okay, this week isn’t going to get a fair review because having two Ghost Riders on screen will elevate even the worst episode to goodness but since the rest of the episode was interesting and action-packed, I think this was my favourite episode of the season so far!

Unfortunately, we won’t be getting any follow-up on this until the end of the month… Christ, the show’s improved but the scheduling is still being utter arse and I’m worried the pacing will suffer because of it. Still, I can’t wait to see how this all plays out so I’ll see you all on the 29th November for… Whatever the episode will be called!