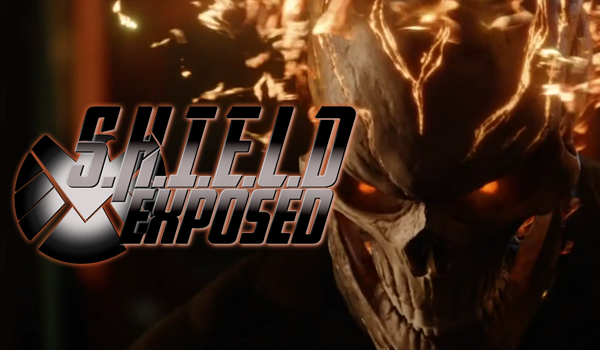 ♫~Here comes the Rider in Red – ride ride,
but soon you’ll be dead! (kill kill kill kill)
He’ll chop off your head with evil steel,
but first you kneel to…~♫

Welcome back to S.H.I.E.L.D. Exposed, agents! It’s been a long time. Too long, for my tastes. So what’s happened the new status quo for our team?

In short; shit’s fucked. The (yet unseen) new Director seems like a bureaucratic douche-nozzle; separating the team, initiating a colour-coded security hierarchy and wrapping SHIELD in a mountain of red-tape. Not that Daisy is fairing any better as a fugitive but soon the two camps are on a collision course due a new, flame-headed player.

I’m glad to see the gang again but even less so that they’re not working together as a tight-knit unit. Mack and Coulson are field agents while Fitz and May lead their own departments while Simmons has become part of the Director’s inner circle in a sly effort to maintain control.

Fitz has maintained his friendship with inventor Holden Radcliffe, who decides now is the best time to unveil his first Life Model Decoy, AIDA. Mallory Jansen does a pretty good job of making a benign robot be utterly sinister. Or maybe I’m projecting because she’s going to go rogue, right? She has to. It’s like Chekov’s Sexbot or something.

During the course of the episode, a deal between the Aryan Brotherhood and the Korean mob goes south (who’da thunk?) and something is unleashed. Well… Someone. Not named in the episode, this spectral being known as Lucy seems to have the ability to warp people’s perceptions and drive them mad. Is she powered, Inhuman or maybe even a g-g-g-ghost!? Given the supernatural leaning this season, it’s safe to say this is one of the mystic Marvel characters but I have no idea who that could be off the top of my head.

But, of course, this is all an appetiser for the main course. Flame-broiled and spicy hot, the latino Robbie Reyes (played by Gabriel Luna) makes on hell of an impression in his first appearance. I really dug the car-flipping call back to the comics in the cold open and Luna’s performance is… interesting. I know Reyes’ deal but I’m wondering how much of that is being played with here or if his bipolar performance is just bad acting. I hope it’s the former. We also get a peak at another important plot point for Reyes; namely his brother, Gabe.

The skull CGI is much more impressive than I thought it would be and actually looks like a decent mix between Reyes’ silver noggin and the bone skulls of previous Riders. It also emotes! That’s pretty cool.

SHIELD’s return is an explosive, fuel-injected, enjoyable ride and sets up tons of new plot lines for the rest of the season. Next time we’ll be getting even more as we finally get to Meet the New Boss.