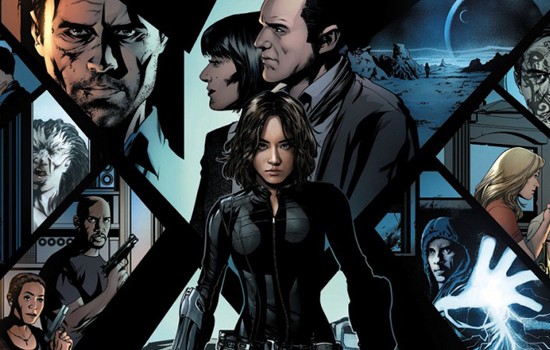 Okay, I think this has to be the best season finale Agents of S.H.I.E.L.D. has had. I mean, it’s had it’s rocky spots this season but it wasn’t as bland as last season and the episodes we’re looking at today — Absolution and Ascension — wraps up the season pretty damn perfectly.

Before we get into the meat and potatoes, let’s lighten the mood a little and talk about some of the lighter moments. The episodes are pretty intense over all and I’m glad that there’s some good comedy beats throughtout the episode, whether it’s FitzSimmons being adorkable or Coulson quoting Star Wars or even Holden Radcliffe just following people around to be helpful. There’s still fun to be had here and I’m so thankful for that.

Round of applause for Chloe Bennett and Brett Dalton, everyone. This pair brought their fucking A-GAME to this two-parter and really brought their characters to the forefront. Chloe’s performance of, essentially, a recovering addict/abused spouse/victim is damn strong and after the shock twist of her wanting Hive to take her back then the reverse-twist that he can’t… Well, Daisy and Hive’s fight is one of the most entertaining and interesting the show has had in a while. Hive’s true form looks incredible! Definitely on par with the excellent creature design we’ve seen in Guardians of The Galaxy and looks very much like a more refined, charismatic version of his comic book counterpart. Brett Dalton’s performance is easily the highlight here, playing a deranged gestalt consciousness to perfection and, even in his final moments, even a little sympathetic. This should be the last of Dalton we see and while it’ll be sad to see him go, at least he went out with a bang.

Oh, and Lincoln too, I suppose. I had a little chuckle to myself when I realised that the cross and jacket was being passed around like pass the bloody parcel with the ultimate prize being a big damn heroic sacrifice. There’s definite shades of Captain America: The First Avenger as Lincoln and Daisy share an emotional goodbye that’s about as cliché as it gets.

In a surprise move, we quickly jump six months into the future to see that Daisy, now under the codename Quake , has gone rogue and is clearly not abiding by the Sokovia Accords and is now being hunted by SHIELD under the orders of a new director. That’s got to be Maria Hill, right? She’s the only viable choice.

And in the stinger, we see Radcliffe celebrate the birth of a Life Model Decoy body for his AI secretary, AIDA. It’s awesome that LMD’s are finally going to become part of the SHIELD show going forward and Radcliffe’s involvement is a good pull since he’s nice and obscure but with a background with robotics. AIDA is also obscure as she is the AI created by Tom Thumb of the Squadron Supreme (Marvel’s thinly-veiled proxy of the Justice League) and gives us a real hint at what we may be seeing next season.

Between an intense finale and the promise of manhunts and androids in the next season, Absolution and Ascension are easily the best episodes this season has had and while we wait for the next season, we can look forward to more Agent Cart-ah… Well how about some Most Want-oh yeah, that’s not been picked up. I guess we’ll have to wait for Agents of S.H.I.E.L.D. to return and for that Cloak and Dagger show to materialise. Catch you guys soon!