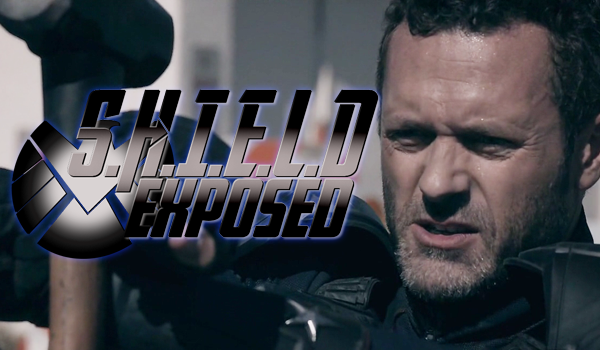 Agents of S.H.I.E.L.D. continues to be amazing at both giving what the audience wants but dicking with them along the way. Last week we had Fitz go full HYDRA and this week we have a Trip-le bill of shocking developments!

First up, we see why Fitz is the way he is. Like Radcliffe says, it only takes a sentence to change someone’s world but what if there was a whole other person there? Having Fitz be raised by his father instead of his dear old mum has a huge impact as we see them share time. David O’Hara, an accomplished actor who is so Scottish it looks like it hurts him, plays a harsh Alistair Fitz; a man who subscribes to that BS mentality that men should be taught respect through beatings and Fitz is visibly uncomfortable around him. Despite the new reality shaping his personality, even he can see that the way he was raised was wrong on some level.

But in some ways, it’s so, so right because here come dat boi; oh shit, it’s Antoine Triplet! Hashtag Trip Lives! It’s truly astonishing to see BJ Britt return to the show after such a long absence and this kinda shoots my theory that this world won’t last long because you can’t bring back Trip and then go back to the real world next episode! That’s not fair!

What’s also not fair is while one cast member returns, one leaves us as Jeffrey Mace goes out like a big damn hero! At the very least, we got a beast of a fight scene between a temporarily super-powered May and Mace before he sacrifices himself to save the team, Coulson’s students and even May herself. It’s bittersweet to see Jason O’Mara leave the show but he got a badass out, even with the switch to reality as AIDA switches off his life support.

In the wake of Mace’s sacrifice and the revelation that HYDRA authorised a building full of children to be demolished, May turns face and gives Daisy exactly what she needs to escape and bring the Triskelion down on her way out. It’s good to see the two friends reunite in what promises to be a knock-down drag-out fight to survive next episode!

No Regrets offers exactly that with an emotionally engaging and high action episode that ramps up the momentum as we head towards the season finale but for now, we’ll see next week how Madame Hydra deals with this betrayal as she calls All The Madame’s Men.