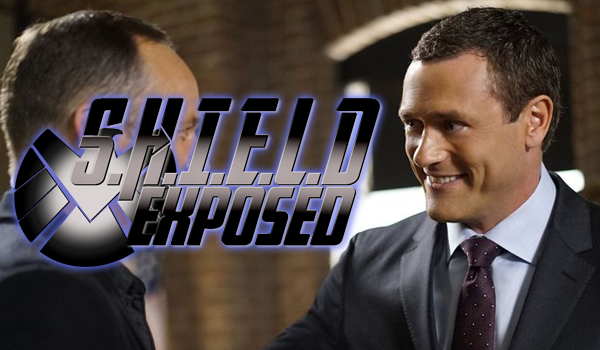 Meet the New Boss continues from the great groundwork in the last episode while building more intrigue. While Daisy and Robbie duke it out over what makes them heroes, the new Director has a special mission for Coulson and May isn’t feeling all that good…

The mystery behind ghost woman Lucy is only compounded by the revelation that there are more like her in a alternative energy lab and they’re all pretty pissed; both at Lucy and at a mysterious other man who is seemingly responsible for their predicament. Another wrinkle is the mention of the Darkhold; a grimoire created by the first practiser of black magic.

It is a Book of Sins that is considered the antithesis of the Book of Vishanti. It sank Atlantis, created the first vampire and has been the bane of the Midnight Sons — a group consisting of Stephen Strange, Blade, Morbius and the Ghost Riders. Whatever this experiment was, it wasn’t good and can only prove to be a deadly threat to SHIELD.

Which is why Daisy teaming up with Robbie is cause for concern as he clearly exhibits some knowledge of what happened or what it can mean. My guess is that Robbie’s uncle (Daisy mentioned him early in the episode) is the mystery man responsible for their current condition, hence the Rider’s interest in a photo in the lab and how quickly he dispatched one of the spectres.

Meanwhile, May goes crazy! Oh, boy, the hits just keep coming this episode, huh? The spectral infection intensifies within May and I love the disjointed camerawork and even the odd performance that Clark Gregg gives to make May’s perspective seem feverish and paranoid.

Jason O’Mara, the dreaded new Director is actually a really upbeat nice guy called Jeffrey! Really wasn’t expecting that. But there are plenty of hints within the episode as to his true identity which I loved. His first appearance is talking about headlines, the base has been redecorated with more American flags, Coulson agreed to his appointment since Steve Rogers went A.W.O.L. and, most importantly, his name is Jeffrey.

Marvel stated that the new Director would have ties to the 1940’s and putting all this information together gives us one answer; the new Director is Jeffrey Mace aka Patriot aka Captain America. The reveal that he is also Inhuman was a brilliantly done as well. I loved Jason’s performance and while he’s not going to win points with fans for not being pro-Team Coulson, he is acting like the Director of SHIELD should.

A fantastic episode to follow-up the premiere and already I’ve got a great feeling about this season. I’ll see you all next week when there will be an Uprising.