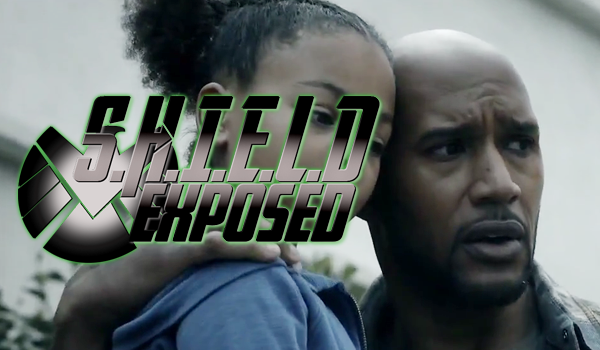 Bit of a clunky title, that.

This alternate universe is boned and I kind of want the show to stay here. It’s really interesting but I bet we’re only going to get two more episodes before we’re back to the real world.

But for now we get to enjoy the family dynamic of the Mackenzie family! Ol’ Mack-Daddy is everything I imagined it would be. He has a fantastic arc this episode, when he reluctantly sells out Daisy to HYDRA-May and turns to the resistance to help. Now, I might be projecting a bit here but does Hope, Mack daughter, remind anyone of the Inhuman super-genius Moon Girl? Maybe it’s just the hair and technical prowess but that’d be an interesting way of including the character!

Speaking of Inhumans, we get to see more of the Nazi-esque checking of papers and see the cramped conditions that the rescued Inhumans suffer in the Resistance base, led by Mace! I have to wonder if Mace is actually Inhuman in this world and if there are other active Inhumans. They need some serious firepower if they’re going to take on HYDRA.

In the HYDRA camp, the almost mind-rapey manipulation by Madame Hydra continues as we see the depths of her infatuation with Fitz. It’s so cringe-worthy, having shades of Hive-Ward controlling Daisy. It’s like she made this bizarre fan fiction world just to be with Fitz and she’s probably treating him the worst out of everyone.

Then again, Jemma always gets a kick to the quad when Fitz proves her entire emotional speech to Ward wrong by straight up murdering Holden Radcliffe’s ex-girlfriend. It’s a horrible scene to see Fitz go dark but even worse when you think about what that’ll mean when he’s freed from the Framework. In the Agents of S.H.I.E.L.D. comic book, Fitz is actually a HYDRA double-agent so maybe this is the first step towards having him turn heel!

With the stage still being set, we can only wonder what this wicked world will reveal next and we’ll just have to wait until next week and hope we have No Regrets.