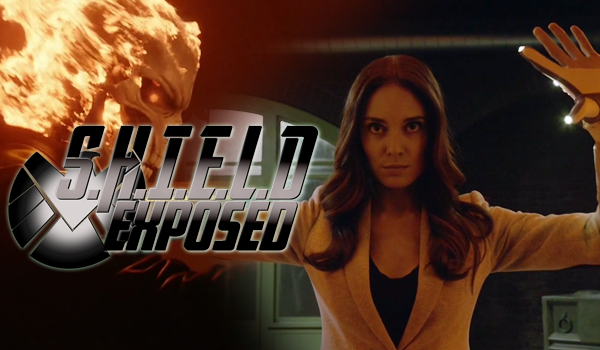 Okay, so here’s the thing… Last week was a bit hectic for me. My mum went into heart surgery so I was looking after my family, and I had two extra TV shows to cover for Invasion Week sooooo… Deals With Our Devils slipped by me entirely and honestly… Kinda glad it did.

Don’t get me wrong, it’s an interesting premise for an episode but seeing things play out twice from two perspectives, which could have been done in an interesting fashion, kind of feels like padding while parts that I was genuinely interested in were barely expounded upon.

AIDA’s reading of the Darkhold is of particular interest because instead of what I expected ie; she couldn’t read it, she not only could but it was in binary as well. The line Thor said about science and magic not being as distinct as we perceive them to be clearly has some merit when it comes to the Darkhold.

Another segment was the conversation between Reyes and the Rider (is it too much of a stretch to call him Zarathos since Eli is flesh and blood?). It could have been a fascinating look at their relationship but was boiled down to it’s barest element; the deal.

The deal we finally see sealed in The Laws of Inferno Dynamics, which is a fantastic title. Again, the most interesting parts are from AIDA and Reyes, the former finally revealed as an LMD and the latter making sure his uncle can’t hurt anyone else.

It’s safe to say that Reyes was never going to be in the show for long so bowing out at the mid-season finale makes sense. Might as well take the opportunity to say that I’ve enjoyed Gabriel Luna in this role and it’s a shame to see him go. Hopefully he’ll be back in the future and maybe this will lead to a solo series in the future but for the short time we had him, Luna was a brilliant Ghost Rider.

I really liked this continuity nod toward the end of the episode. Very cute moment to cement Daisy’s return as a rostered Agent. Good thing Mac and Yo-Yo got together too because holy fuck, that was getting tedious. But this is the mid-season finale so we need a cliff-hanger right? Something to get people interested in the next arc. Something like…

Yeah, May being revealed as an LMD’ll do it! I can only presume she was replaced when she was still having visions. Could Radcliffe also been an LMD? Could Fitz? Anyone who has interacted with AIDA in the house is immediately suspect! Shame about whatsisname. Guy. Snappy.

Not a bad winter finale overall but I can’t wait to see how the show progresses with this rogue AI plotline. I guess I’ll see you guys in January!