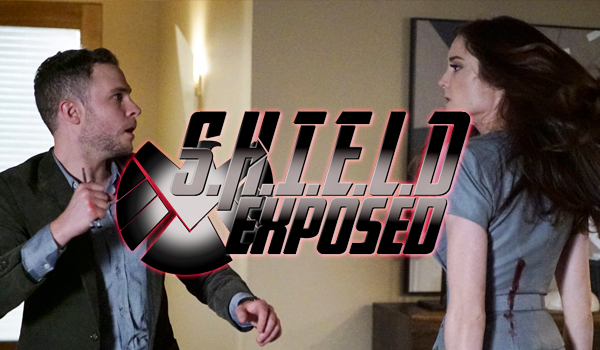 Oh! Hello! Didn’t see you there and apparently I didn’t see that Agents of S.H.I.E.L.D. came back 3 days ago either! This is probably due a combination of my general indifference to life, anxiety of trying (and failing) to get money together to go to Toy Fair and looking after a family member who went through major surgery. So what’s Agents of S.H.I.E.L.D. midseason premiere got to distract me from that? Ooooooooh, robot uprising! It’s about damn time! I, for one, welcome our new robot overlords and that snazzy new title card for the LMD arc. Real nice, that.

AIDA’s descent into sapience and murder is so rote that most of this plot point is dedicated to Mack and Yo-Yo taking the piss and mentioning movies this kind of thing happened in. Which is actually my favourite part of the episode because those two being snarky fucks is hilarious.

What else have we got… We’ve got Daisy and Mace (feat. Simmons) going on a mission to find Senator Nadeer and it’s nice to see Jeff trying with Daisy. Naturally she’s suspicious of him but running a few missions should build some trust so that they can triumph. God, he’s got me doing it now…

Speaking of trust and the titular Broken Promises, we get a look at the family dynamic of the Nadeers and holy fuck is Ellen an evil bitch! Seriously, Parminder Nagra’s come a long way from the earnestness of Bend It Like Beckham and become Cruella De Vil! Her poor brother, seemingly unaffected by terrigenesis, is ambushed and almost ganked by the Watchdog hired goons Nadeer has on the payroll but surprise!

After revealing some super-speed and getting a shot in his gut for his troubles, his body crusts over as it sinks into the ocean. Now, this secondary terrigenesis isn’t without precedent. Many of the more famous Inhuman characters (ie, the ones we’ll be seeing in ABC’s upcoming Inhumans series) have undergone this and, much like secondary mutation, it can be a crapshoot so who knows what poor Vijay will look like when he emerges again.

Oh and Radcliffe turned heel and built a SECOND AIDA off-screen between season halves. And seems to be trying to get the Philinda ship sailing for nefarious purposes. I didn’t care much for this reveal but then, in retrospect, they jumped to AIDA’s evil reveal pretty damn quickly and we need to pad out this half of the season somehow sooooo…

Not a bad kick-off but I was expecting a little more oomph since we’re dealing with the loss of a major Marvel hero but hopefully Mace will be showing his true colours in four days time with the patriotically titled The Patriot.