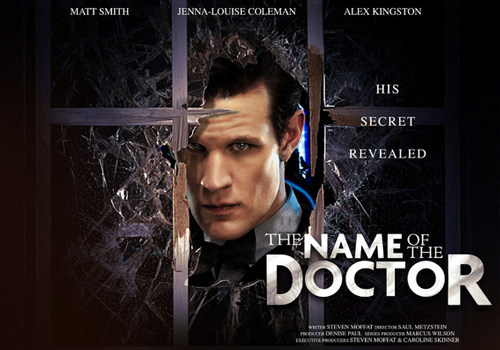 I…. I truly don’t know where to begin this magnificent episode, I truly don’t. What the actual hell, Moffat? After so many mediocre episodes this season, you knock this one out of the god damn park! THIS is Doctor Who at it’s finest and I hope it manages to keep this standard up during the 50th Anniversary and beyond.

First thing I have to address is the opening, which has Clara appearing alongside various incarnations of the Doctor. It’s an amazing scene with some astounding stand-in work and some less fantastic green screen, though they do a great job of matching Clara’s attire with the style of the times. It says a lot that she could have fit into any Doctor’s incarnation and not looked out of place. We see her interact with the first Doctor directly and then just call after the other classic Doctors. It’s a great sequence and wonderful to see the old Doctors back in some form.

We’re back with the Victorian Gang too! Vastra and Jenny are at home while Strax goes to Glasgow on his weekend off to fight Scots! Brilliant. The Victorian Gang is always a welcome return as well as the Alex Kingston as Professor River Song. They’re a fun bunch but their banter is soon cut short as Jenny is murdered right in front of them by the Whisper Men. It’s a visceral gut-punch as she apologises profusely before fading from sight. Soon, everyone at the conference is under attack from Whisper Men and the episode kicks into high gear. The music in this episode is absolutely fantastic, buidling on the atmosphere in each scene. The Doctor and Clara find themselves on the way to Trenzalore and these two have a great dynamic throughout the episode; Funny and sweet but tragic and heartbreaking at the same time.

Appearing at the Doctor’s final resting place (the TARDIS grown to gigantic proportions after a “size-leak) on Trenzalore, The Great Intelligence claims that this was his final blood-soaked battle and that he became something much darker towards the end, becoming known as The Storm, The Beast and, most terrifying of all, the Valeyard. For those who are relatively new to Who lore, the Valeyard is the Doctor gone wrong. An evil future regeneration between his 12th and 13th regenerations according to the Master.

Inside the tomb, the Intelligence finds the means to undo the Doctor’s every victory and triumph, and wipe out the universe in the process. As he does so, the Doctor convulses on the control room floor as the gang rush outside to see the stars vanish from the night sky. Slowly, the universe becomes colder and even the Doctor’s allies change for the worse, as Jenny disappears and Strax tries to kill Vastra. It’s a truly desperate situation. Clara, having remembered the events from Journey to the Centre of the TARDIS, knows that she appears in other times to save the Doctor so naturally she heads into his timestream to undo the Intelligence’s machinations. Once everything is restored to normal and the Doctor is back in fighting shape, he has every intention of following Clara and saving her this time. As the others argue with him about this, River Song, enraged and frustrated, attempts to slap him only to catch it.

In the sweetest and heart-breaking scene in the episode, the Doctor acknowledges River’s prescence. Throughout the episode, she has only appeared to the others and not to him because this is River Song we met all the way back in Silence in the Library. She is the back-up copy of River. The Doctor and River share their final goodbye and it’s wonderful. A story that started 5 years finally reaches its natural conclusion as they say their goodbyes, only to promise to see each other again. I loved it!

Clara falls through time, encountering the Doctors and saving his life, explaining the mystery of the Impossible Girl but her story isn’t over yet! The Doctor appears to save her and he sees something that scares him. Clara confirms that she saw 11 Doctors as they stare at a silhouetted figure overlooking the dying embers of Trenzalore and the Doctor can only muster that the mysterious figure is the Doctor’s greatest secret. Clara collapses and as the Doctor carries her out, the figure speaks. He had no choice. He only did it in the name of peace and sanity. The Doctor scowls and departs protesting “But you didn’t do it in the name of the Doctor.”

And the fandom collectively creamed itself as credits roll.

Oh, boy. Where to even begin… First up, JOHN F***KING HURT is the DOCTOR! Amazing! Secondly, there is so much speculation going on right now, it’s unreal. Many are saying that this is 9th Doctor, the one who ended the Time War to which I say, really? Every season since the series revival has steadily allowed the Doctor to put the events of the Time War behind him and go on with his life. What would be the point in dredging it all up again?
My thoughts? This is the Doctor’s final regeneration, since the Doctor established that the time tunnel was not only a gateway into his past, but to his future as well (And the Intelligence refered to him as “old man”). He went renegade and became something wholly unlike the Doctor that he lost the right to the name. He is the Time Lord Victorious, he is the Beast, the Storm, the Valeyard. That’s my take on it and I have to say it makes a whole lot more sense than a “forgotten” regeneration that would undo years of character growth. Hell, it might even be a good set-up for the 50th Anniversary…

And with that, we leave Season 7 and look forward to the future six months from now when The Doctor returns. What were your thoughts on the episode, John Hurt, and the season as a whole? Let me know in the comments and I’ll see you guys on 23/11/13!