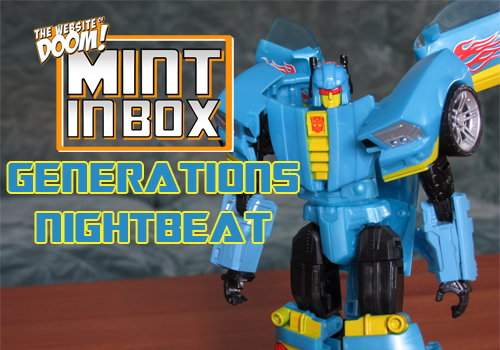 Nightbeat has been a firm favourite of mine since childhood when I read the Marvel stories The Big Shutdown! and Bird of Prey. While other Transformers were just soldiers, this Autobot was a detective first and foremost and I really latched onto the idea. In the more recent IDW run, this characterisation was built upon and now he’s a member of the Lost Light crew in the ongoing title More Than Meets The Eye. Some of the more recent offerings from Hasbro’s Generations line of figures has focused on IDW characters and this is no exception so let’s take a look at Transformers Generations: Nightbeat. (Massive shout-out to my buddy Dawfydd Kelly selling me one!) The American releases of this sub-line all come with reprints of IDW storylines and Nightbeat’s wave (and maybe a couple others) all feature parts of the recent Dark Cybertron storyline. Now there’s a few problems with this. Firstly is the cover, featuring Nightbeat rendered in the body of the 2010 Jazz toy. Early preorders also showed the figure like this but this is obviously not the toy we got. Secondly, the issue that comes with Nightbeat BARELY features him!  Dark Cybertron being pretty awful artwise is bad enough, but they didn’t even pick a good issue to showcase the character. Nightbeat, as he was released, is using the recent Bumblebee body and it looks pretty good on him. The vehicle form is chunky and looks like the kind of muscle car a hard-boiled detective might drive. His paint scheme is a slavish homage to his G1 roots, even down to the flame deco on his doors. The paint is crisp and clean, picking out some great details in silver and yellow. His dual blasters can plug into the rear of his vehicle mode as both front-facing weapons or maybe even some Star Trek nacelles! Transformation is incredibly simplistic but is also intuitive enough to not feel boring. There’s some clipping issues that spring up when going from robot-to-vehicle but nothing major. The robot mode is pretty cool. It has good proportions and casts a good silhouette but there’s some unsightly streaks in his metallic blue plastic that you should be aware of. His head sculpt is spot on but it feels a tad small. only swivels side-to-side and his red visor appears to have been chipped, which REALLY damages him for me. ‘Beat can pull off an okay assortment of poses but nothing spectacular. His shoulders are especially bad, because they move along with the rest of the arm, leaving a lot of poses out of the question. Nightbeat’s forearms have a light wash applied to them, resulting in some pretty nice panel-lining which was a nice surprise. The dual blasters can be combined for one big gun, two seperate guns or pegged into the ports under Nightbeat’s arms for two underslung “claws”. Compared to the RTS Jazz mold that he was intended to be, Nightbeat comes off all the lesser. While his vehicle mode looks fantastic, the robot mode suffers from the lack of articulation and build quality that the Jazz body had and the Bumblebee body just feels… bad. It looks closer to the Nightbeat we know but it suffers from bad articulation. Ultimately, am I happy with this figure? Little bit yes and a lot more no. Am I happy to have a new Nightbeat for my Lost Light shelf? Yes, I am. Am I happy that his sub-par articulation and numerous QC issues will mean that he’ll do nothing but stand in line? HELL NO.

I’m really disappointed with how this figure turned out and can’t recommend it and that really sucks to say.