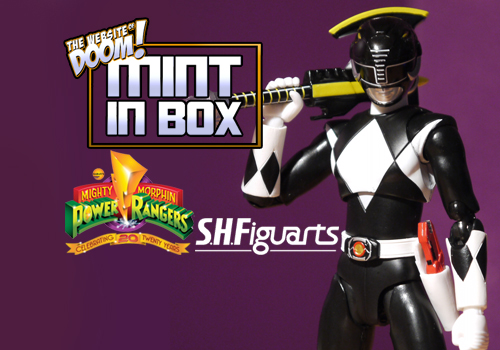 Once you go Black, you don’t go Zeo.That’s the best Ranger joke I had for this, okay?! Jeez, youse people… So yes! Welcome back to another installment of “Sharp-O gushes over his expensive Japanese toys” but wait! What’s this? The Mighty Morphin’ Black Ranger was released in AMERICA? Yes, the S.H. Figuarts based on Kyōryū Sentai Zyuranger are all getting a release in the rest and being branded as Mighty Morphin’ Power Rangers. Because screw Super Sentai, these are our Powerful Rangers! Might Morphin’ Black Ranger is an import of Mammoth Ranger, with a more western friendly box. No changes were made apart from this but its still a damn impressive release. The box is actually nothing like the Japanese release, being a window box and being rather generic. Unlike the Kyoryu Red box, this doesn’t really have any outstanding features or aesthetic similarities to Mighty Morphin’ but it still works pretty well. The Black Ranger’s accessories include the standard assortment of interchangeable hands (one of which is specifically for his roll-call pose), a folded Blade Blaster, a Thunder Slinger, his signature Power Axe and a couple others that you’re probably curious about but I’ll get to later. Like all S.H. Figuarts, Black Ranger is articulated up the wazoo! Seriously, it has 4 points of wazoo articulation. From pulling off his roll-call pose or beating on baddies, you can pull off all sorts of great poses. If there’s one thing I had to complain about, it’s another leg issue that I don’t think is wide spread. The thigh moulding on the right side is a little off, meaning it’s not quite as uniform as I’d like but I can live with that. Size-wise, Figuarts are a couple inches taller than Bandai of America’s recent 4″ action figures and look far less ‘roided up, making the Figuart far more accurate to his onscreen appearance. Coming to the accessories, the Blade Blaster will spend its entire life in the holster on the Ranger’s belt and can’t be held easily. The Thunder Slinger (I had to wiki the name) is a holdover from the Japanese release of a weapon that I don’t recall the Rangers ever using but I’ll let it slide. What I won’t let slide is the fact that the Thunder Slinger doesn’t sit comfortably in any of the provided “holding things” hands. You’re staying in the tray! Black Ranger’s signature weapon, the Power Axe, is perfectly replicated and looks absolutely fantastic! People have asked why I chose Black instead of the more popular Red, Green or White. The answer is simple, his helmet was always my favourite as a kid and his axe is FREAKIN’ BADASS! Swords, daggers and lances are cool but when you see a big meaty axe coming for your head, you move! It’s also a blaster! Unfortunately, it’s slightly inaccurate but there’s a reason for that. With the releases of Black, Blue and Yellow, will come with remoulded versions of the Rangers’ signature weapons that can combine into the iconic Power Blaster. Black comes with Red and Blue’s components but I’m not sure which follow up will include Black’s axe in blaster mode. As with my previous S.H. Figuart review, I am thoroughly impressed with this figure and highly recommend picking it up as either a stand alone, or as part of the Mighty Morphin’ team! It’s great that Tamashii Nations and Bluefin Distribution are bringing more and more S.H. Figuarts over to the west. You can currently find most of the Mighty Morphin’ S.H. Figuarts over on Amazon UK and through other online retailers.