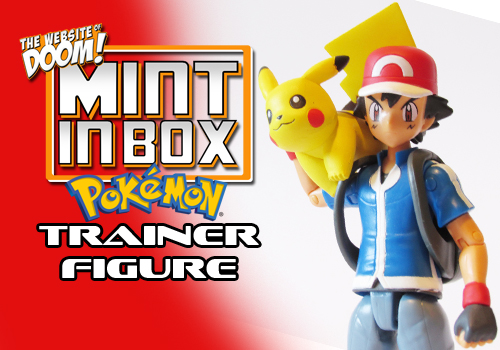 Correct me if I’m wrong but it’s been a while since a Pokémon line has produced an articulated figure of a Trainer but Tomy seems to be remedying that with the introduction of a brand new subline. “Ash + Pikachu” equals a fairly cool little release. They’re packed in a similar window box to every other Pokémon figure pack in the XY line. Ash Ketchum, primary protagonist of the Pokémon anime for going on… 18 YEARS (wow, I feel old now…) appears in his latest costume for the show which debuted with the XY anime. He’s been through a fair few looks over the… 18 years… but this looks pretty sharp! The figure conveys the clean lines and sharp colours of this outfit very nicely. Even the face printing is crisp! The Ash figure has 13 points of articulation, which is a lot lower than I’m used to and even lower than Bandai’s Power Rangers figures but for some reason, I don’t hate it here. I LOVE to pose figures and take pictures so a lack of points means a lack of dynamic posing options but I think the reason I don’t mind it here is that you rarely see the Pokémon cast not standing up with both feet firmly on the floor. Would I like a waist swivel, ankle tilts and maybe some alternate hands? Sure, but for the constraints of the price point, I’m not unhappy with the articulation. Pikachu, awesome yellow mascot that he is, accompanies his partner in this set and is slightly smaller than other versions meaning it is more in scale with Ash than other Pokémon figures which is a cause for concern really but the scale issues entirely depend on what scale of Pokémon figure you get so your mileage may vary. Accessories-wise, all Ash is rocking is a backpack and nothing else and while I lament the lack of a Pokéball, the backpack is a nice addition. It’s made of a softer plastic and the straps can be unclipped to allow you to more easily add it to the figure too. There’s a hole near the shoulder strap to allow Pikachu to rest on Ash’s shoulder, with some careful balance. One cool thing about the packaging that I didn’t notice until later was that the backing card is a diorama of Lumiose City, an iconic location for the XY games and show. It’s a nice little addition and adds a little more playability. Overall, I’m pretty impressed with this figure. It’s not doing anything new or special but I’ve seen similar figures from a similar RRP of £9.99 be far more disappointing and I hope to see more Pokémon trainers get releases down the road!