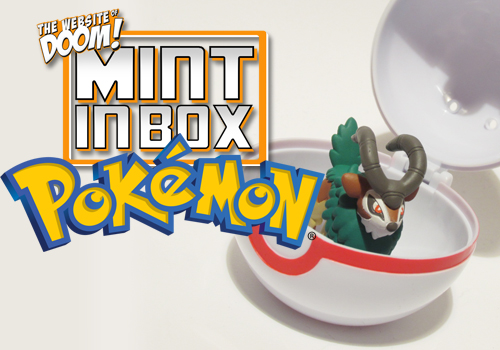 This Clip ‘n’ Carry Poké Ball was kindly provided by the fine folks over at TOMY and it’s totally not Charmander! The slick white and transparent window box design carries over from the many other releases and looks great. Included is an Attack Tag that serves no real purpose other than to confirm Gogoat’s type. I’ve never gotten the reason for including these. The Premier Ball is one of the MANY varieties of Poké Ball in the Pokémon world, this one being a commemorative Ball issued when you buy 10x Poké Balls. It has no special features and has the same basic catch rate as a regular Poké Ball. In the game, it’s a brilliant white and red colour scheme but, unfortunately, TOMY fell short in the plastic counterpart. The “white” is actually a dull off-white/grey that looks rather dingy. The Clip ‘n’ Carry functionality works just as well as other releases and can clip onto the Belt TOMY has previously released. Releasing Gogoat from his Premier Ball, I’m instantly smitten. I really dig the Gogoat design and he’s really fun in 3D. In the game, he’s one of the few Pokémon in X & Y that you can ride around on. It’s a solid little toy. Overall, another fun Pokéball release from TOMY and I recommend it, purely for the roleplay fun you can have.