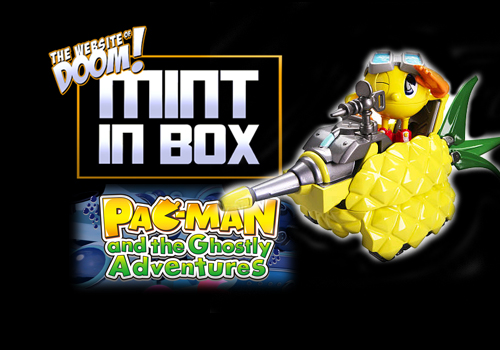 The Pac is back and war has changed…
Everyone knows who Pac-Man is, he’s the most iconic video game character of all time but did you know that he now has both a new cartoon series on Disney XD and a toyline? Me neither! The legendary Pac-Man has made a triumphant return with a variety of cool figures, mini plush and even a transforming vehicle – just like in the Disney XD TV series. Set to be the talk of every playground, the brand new colorful range of toys from Bandai will enable kids to collect their favourite Pac-Man characters, or battle Pac with the baddies from the show.

I first saw this toy in a review by my buddy Bens Collectables and ever since I’ve been fascinated by this bizarre product so when I was offered the chance to review some product from this line, I jumped at the chance to get my hands on it. Pac’s Pineapple Tank comes on a fantastic bubble card and surprisingly, doesn’t come with 18 languages on it so maybe this is an American box? I don’t know. I’m so used to European packaging coming with a bunch of different instructions on it that it’s nice that the packaging and images on the back are unobstructed by reams of text. Much like other Bandai toys at the moment, the Pac-Man toys have a code that can be used in the accompanying free app game, Pac-Man Dash. After my last attempt, I’m not going to try it out but I’ve seen it run and it looks pretty fun! The Pac-Man himself is a rather simple figure but has articulation in his arms and his body/mouth opens up. Interestingly, his body parts and accesories can be removed quite easily if you like your Pac-Man closer to his 8-bit origins. His regular bipedal form’s shoes and gloves are joined by some nifty tank commander goggles so ol’ Pac looks to be taking the ghost-hunting to a bizarre new level. And now we come to the main attraction, the Pineapple Tank. Yes, it’s exactly as insane as it sounds. This transformable fruit armament features a rather simplistic conversion from delicious fruit to armoured death machine. It instantly brought to mind a mixture of the Food Fighters and M.A.S.K toys of my youth. It’s so silly that I instantly fell in love with it and I’ve been idly rolling it back and forth on my desk ever since. Pac’s Pineapple Tank is an immensely goofy and stupid premise for a toy but if you appreciate the goofiness, you’ll enjoy this particular set like I did. Pac’s Pineapple Tank retails for £14.99 and there’s a lots more Pac-Man figures that you can check out on Bandai’s website!