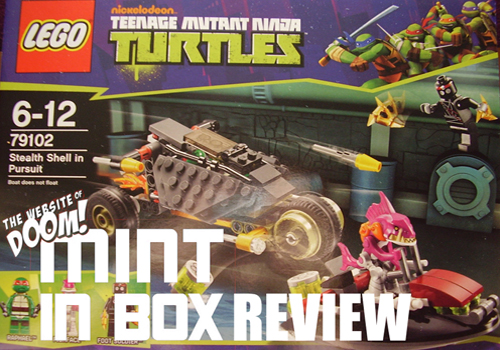 Hi, guys! Sharp-O back once again with another Mint in Box and today we’ll be looking at the other half of my LEGO duet and a newcomer to LEGO as a theme. Let’s grab some pizza and take a bite into the delicious LEGO Teenage Mutant Ninja Turtles. COWABUNGA!

LEGO TMNT Stealth Shell in Pursuit 79102 is a fantastic set, I’m putting that right out front. This set was way more fun to build for me than the Mandolorian Speeder and no, it’s not because it had less finicky pieces (My manual dexterity is fine, thank you!). The builds were relatively quick and simple but they’re engaging enough to make it fun. The variety of pieces also goes a long way to increase the fun of this 162-piece set. Matching up with the TV shows aesthetic, the pieces have a nice mix of blacks, greys and super-bright neon colours. Turns out if you throw in some neon greens, pinks and yellows that I’ll have more fun. Let’s take a look at the set proper. The two builds are in their own separate bags which is really convenient, helps me keep track of what pieces I need as I build. Like last time, I’m going to build the minifigures first, then move onto the Sewer Skimmer and the Stealth Shell. These minifigures are great. You get Raphael, who looks amazing as a minifigure. As well as a new head and shell backpack, the printing is great, with little details the character model has to differentiate him from the other 3 Turtles. Fishface uses a method I’ve seen used in the LEGO Star Wars line for thin characters and I love how it turned out. He has crazy robot legs too! The final minifig is the Foot Ninja and is the army builder figure and he’s alright, nothing much to say about a generic black-clad ninja. The bulk of the Sewer Skimmer is the boat shell and the barrel throwing mechanism but it comes together once you add the little flourishes of detail. The completed Skimmer looks like a fan boat minus the fan, obviously. The Mutagene Ooze barrels and their launching mechanism are really nice, as well as the neon green flick missiles. It was the simpler out of the two builds but very fun. The Stealth Shell is the more involved build but still relatively simple. The first part is mainly the cockpit, building the core of the vehicle and the controls. Adding a bunch of Technic parts to the set allows for the chassis to be solid enough for rugged play. The canopy is also a great bit of design work, having a central structure for the shell components to hinge off of gives it a more angular armoured feel, rather than just a boxy canopy. The completed Stealth Shell is a Turtle-y awesome vehicle and I could see it working well in the LEGO Super Heroes line as a Batman vehicle. The Technic wheels are nice and chunky and roll freely, which has caused me to idly roll it back and forth on my desk while I’m working. I have no idea why but it feels good. It’s fun, chunky and totally in line with what I imagine to be a TMNT vehicle. As I said before, I had a lot of fun with this set. The builds are quick but engaging, the LEGO styling of the TMNT aesthetic is fantastic. It’s a robust and dynamic set that can be built quickly and enjoyed within half an hour. I also like that all the TMNT sets have instructions for other vehicles you can build using the set you have, namely through Donnie’s Lab portion of the LEGO TMNT page. All in all, for an RRP of £19.99, I feel this set could be enjoyed by any LEGO fan and I heartily recommend picking it up!