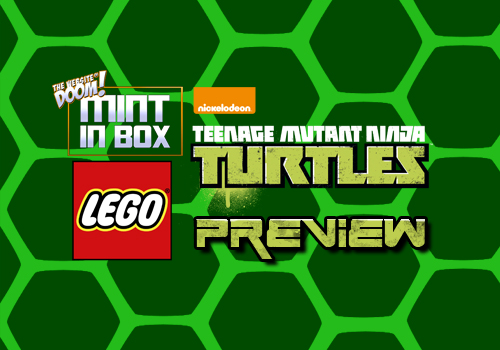 Just in time for the Easter Holidays, LEGO is releasing a brand-new range of their smash-hit LEGO Teenage Mutant Ninja Turtles and I’m going run down these new sets and give my general thoughts. Be sure to click on the images for an enlarged version so you can see all the little details! Leonardo has teamed up with Karai and her super-cool motorbike to grab the lost mutagen canisters. Speed across the city streets and hang on tight as Karai accelerates on the dual-exhaust motorbike and swerves past roadwork signs and lights. Don’t forget to lasso Leonardo along for the thrill-packed ride! Retrieve that mutagen before it is too late!  Includes two minifigures with weapons and accessories: Karai and Leonardo.

I won’t say too much about this since I’ll be reviewing it in a couple days but it’s nice to see another entry level set. Uh-oh, it’s Turtle trouble! Raphael has infiltrated the Kraang’s lab and discovered the Mutation Chamber which can turn humans into mutant creatures. Climb the ladder with Victor, spin the electrodes and knock him into the mutation tank. Turn the knob to activate the mutation. When the transformation is complete, open the doors and unleash the fearsome Spider Bytez!  Includes two minifigures with weapons and accessories: Victor, Raphael, and a Spider Bytez figure.

I really like the gimmick of this set. It’s simple concept but allows kids to tell a story with their set or even make up one of their own! Spider Bytez is a new mould to suit his, equally rotund, animated counterpart. I’m surprised they didn’t include a Kraang minifigure as well. The armoured look of Raphael is a little weird to me too. Take to the skies with the Turtles’ homemade T-Rawket and battle the evil Kraang as they drop mutagen bombs all over the city. Dodge the Ship’s flick missiles and return fire with a sizzling slice of Turtle Power from the trusty pizza shooter. But watch out! April’s dad has been transformed into mutated Dr. O’Neil so strap on a backpack glider, activate the ejector seat and launch a Turtle into the air to save him. Turtle Power! Includes four minifigures with weapons and accessories: Donatello, Michelangelo, Mutated Dr. O’Neil and The Kraang.

I think this is the set I have issues with. The T-Rawket looks like a VERY simplistic build for the price-point but the Kraang ship looks like a fun build and the new aviator style Turtles are a great throwback to the 80’s toy line and the bizarre uniforms they’d have then. The set rounds out with a Kraang pilot and the mutant bat guy with the huge noggin! The power cell has been stolen by The Kraang and only the Turtles can stop them in their awesome Turtle Sub. Rev up the engine and power away in hot pursuit of the Kraang sub with Donatello, Leonardo and Leatherhead.  Watch out for the Kraang sub’s flick missiles, fire the shooter and detach the mini sub to ambush the shark droids’ underwater vehicle. Select a weapon from the armory and dive into the water for a thrilling Ninja Turtle vs. The Kraang underwater standoff! Includes four minifigures with weapons and accessories: Donatello, Leonardo, two Kraang, plus a Leatherhead figure.

I haven’t seen the Turtle Sub in the show but I assume it’d look something like this, maybe with bigger flippers. The interior is fantastic! Very detailed and it looks like you could easily fit all four Turtles into this sub. I like how the Kraang troops have little shark fins for underwater combat and the new Leatherhead looks pretty good! One thing I love about the Turtles theme is that they’re never afraid to break out a new mould for one of the unique mutants and they always pull it off pretty well.

Much like last year, this years sets are sure to be a big hit with kids and collectors alike and are available in all major toy retailers now. Be sure to come back soon for my review of the Karai Bike and make sure you check out the super-cool alternate building instructions on the LEGO TMNT website if you want to try building something different with your sets!