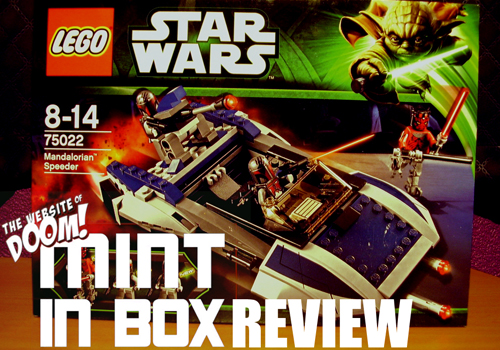 Hi, Guys! Sharp-O back once again with another Mint in Box and today we’ll be taking a dive into a different pool but one somewhat familiar to this column, the world of LEGO. I’ll be looking at a couple actual retail LEGO sets instead of just minifigures for a change and first up is some LEGO Star Wars! *hums the theme tune*
LEGO Star Wars Mandolorian Speeder 75022 is an interesting set because unlike the movie stuff, I have no idea what this pertains to so I did some digging (Read: went to wookiepedia) and this set is based off the time during the Clone Wars tv series when a back-from-the-dead and freshly bionic Darth Maul took over the planet Mandalore (Boba Fett’s home planet) with the help of the Mandolorian Death Watch. This set consists of 211 pieces and three exclusive minifigures, the aforementioned Darth Maul with his crazy robot legs and two Mandolorian Super Commandos. This review represented a unique challenge because I couldn’t simple take it out of the box and review it, I had to build it first so I documented the process and will give my thoughts as we go! Just like when I was a kid, I built the minifigures first. Darth Maul is a cool minifig representation of his animated counterpart and I like how they got around his unique look by giving him a little horned skull-cap. His legs are really neat too, with this digitigrade beastial styling. The Commandos are standard army builder minifigs, looking identical and sharing the same general aesthetic as other Mandolorian characters. I will note that I find the hand print on the helmet funny since, y’know, minifigs have stubby c-hands. Okay, here’s the deal. I haven’t built a LEGO set of this size since before I had a beard, when I was a little baby Sharp-O Jr, and did you know what I found out during the course of the next 90 minutes? My giant man hands find the dozens of tiny pieces extremely difficult to place (The set has an age range of 8-12). This sets high piece count is a testiment to how finicky some sections can be but it’s a rewarding experience overall. There’s layers upon layers of panels and blocks and… … Cool curves that hide an ingenious flick missile system. There’s quite a cool set up in the sides that allow some panels to slide against the flick missiles to cause them to launch. There are some stickers too! I can’t think of the last time I applied stickers to ANYTHING. YAAAAAAAY! Under the main cannon is storage for both of Maul’s lightsabers and the Commandos’ rifles. Overall, while this may have been a bit difficult for a rusty LEGO veteran like myself, I found the experience to be quite fun. The finished model is intricate and has a surpsingly clean look because of that. The minifigures are fun and well designed and I can see anyone getting a lot of fun out of this set. With an RRP of around £24.99, I’d recommend most LEGO Stars Wars fans check this set out for themselves. Come back soon, when I take a look at a heroes in a half shell!