I figured with the release of STAR WARS: THE CLONE WARS season 5 on blu-ray and dvd recently this joke is still relevant right? Right? It’s a good enough [… 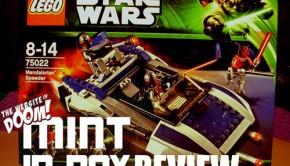 Hi, Guys! Sharp-O back once again with another Mint in Box and today we’ll be taking a dive into a different pool but one somewhat familiar to this column, […