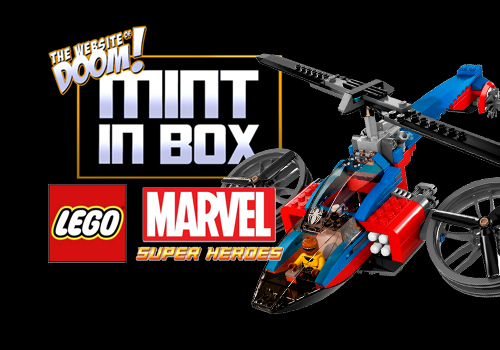 The Marvel Super Heroes line debuted in 2012 and much like the Batman/DC line before it, it proved to be a smash hit with kids and adults alike, spawning dozens of sets and even a video game, which is where today’s review comes in. 76016 Spider-Helicopter Rescue is inspired by the LEGO Marvel Super Heroes video game, or to be more accurate, one of the many vehicles within the game. There are two sets in the current Marvel line up that feature Spider-Man with vehicles from the game, the other being 76014 Spider-Trike vs. Electro. Both of these sets also fall under the “Ultimate Spider-Man” subline so it’s drawing inspiration from both the video game and the TV show of the same name. The box includes three bags of parts, two instruction booklets, a decal sheet and a comic, detailing the adventure and features of the three Ultimate Spider-Man LEGO sets. It’s a fun little extra that I really liked! But on to the minifigures! This set features Spider-Man, Mary Jane Watson, Power Man and Ultimate Green Goblin. The latter three are exclusive to this set and ol’ Goblin is our very first Big ‘Fig! I initially wanted to review either this set or the Hulk Lab Smash set just so I had an excuse to cover this kind of minifigure. He’s almost twice the size of standard minifigs and can even hold minifigures in their hands! Mary Jane has a pretty sweet Spidey-Heart torso piece, as well as a double-sided face, and I’m always happy to see Luke Cage (Power Man) get more publicity. If there’s one weakness, it’s Spider-Man. There’s nothing inherently wrong with his design, it’s a problem that LEGO has in general with tampographing white over red plastic. It’s comes off as a rather faint pink and is a problem I’ve encountered before in the Minifigure Collection (looking at you, Series 8 Santa). A nice little quartet, despite a minor flaw. The first bag of parts is used to build up the Goblin Glider and since we’re dealing with with a Big ‘Fig, this is much more robust and heavy duty than you’d expect. They do a great job of making the glider look aerodynamic, despite it having to fly a pretty heavy dude around. It’s even labelled as Oscorp tech so I guess Norma Osborn isn’t being subtle as this Goblin! It’s surprisingly heavy once complete and Goblin is riding on top. My tamashii stand was buckling under it’s weight until I tightened up the joints! It also includes flick missiles on the wing arms. The second bag consists of constructing the cockpits and the weapon pods. This is the bulk of the helicopter build but uses smaller parts instead of the larger pieces we’ll see later on. I was surprised to see that Spider-Man’s cockpit has no real floor, just two studs to stand on to allow for the web swinging delpoyment gimmick. The weapons pods are almost identical apart from the interior mechanisms. The third, and final, bag consist of the largest pieces and the main components for the rotors and tail fins. These are pretty big parts, much larger than anything I’ve handled before (Careful now) but really give the vehicle it’s shape. The rotor spins especially well once completed and added to the top of the build. The cockpit’s windshields are also added in this section and their curves really help this bird look it was built for speed. The Spider-Copter was definitely too large and heavy for my stand so I had to resort to posing it on a box. Overall, the set is brilliant. It’s an engaging, fun to build set that can be done in around an hour-hour and a half and has a lot of built-in play features. The Spider-Copter’s weapons work pretty well and the webbing net launches much further than even the flick missiles. The web swing delployment isn’t really necessary but I can see why they added it. This is the first LEGO Super Heroes set I’ve reviewed and I had a lot of fun doing it. I hope to do more in the future. 76016 Spider-Helicopter Rescue retails for around £44.99 and is worth every penny in my eyes.