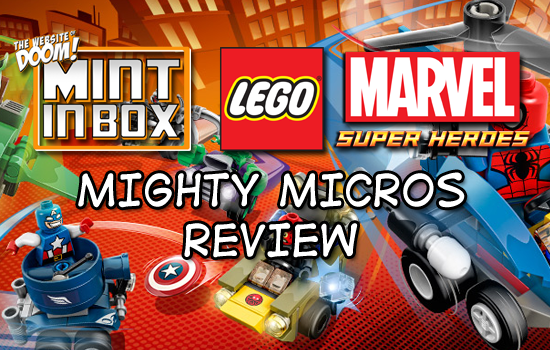 A while ago, some clever clogs online built a bunch of little go-karts themed around the Marvel and DC Comics LEGO Superheroes lines and they were pretty cool. I bring this up because what I’ll be looking at today appears LEGO’s official answer to that in the form of Mighty Micros! The first wave is split 3×3 for both Marvel and DC Comics sets and today we’ll be looking at the Marvel side! Immediately out of the gate, the Marvel Mighty Micros are showing the potential with some classic hero vs. villain battles! Captain America vs. Red Skull! Spidey versus Goblin! Hulk vs. Ultron? Okay, that’s probably more to do with recently having Ultron as a major villain but whatever, just look at these guys! If you couldn’t guess already, LEGO has gone balls-to-wall silly with this line and I loooooove it. Without further ado, let’s jump into these sets because it appears that the world is once again on the brink… of Wacky Races. First up, and arguably the biggest rivalry amongst these sets, is Spider-Man vs. Green Goblin! In an interesting little twist on the formula, each micro-kart (I don’t know what LEGO are calling these so that’s what I’m going with) has their own instruction leaflet while all the parts are mixed together. Were these at one point going to be sold separately? Another interesting thing about these sets are that the minifigures are mini-er than usual! Spidey and Gobby have the tiny legs! And simplistic, almost pre-school simple, design elements. Not that I’m complaining, I think they’re really cute! And they have fun little camera and Pumpkin Bomb accessories! Once assembled, the micro-karts resemble uncomplicated versions of the Spider-Copter and Goblin Glider. Well, in the Spider-Copter’s case but Green Goblin’s ride seems a bit girther than it should. Plus they both have regular wheels, which is hilarious as they’re both aerial vehicles. Next up is Hulk vs. Ultron! Hulk looks ridiculously adorable, despite trying his best to look menacing while Ultron seems to have gone back to his comic roots with the classic open-mouthed scream face; bubbling with red energy and sweet metallic silver all over. Their accessories don’t make a lick of sense to me though… When it comes to the micro-karts, I’m split right down the middle between loving them and hating them. Ultron’s spider-crab-car-thing is kiiiinda like stuff we’ve seen him do before but it’s not interesting while Hulk’s car has hulk-hands. That’s dumb as rocks and I adore it. It’s a literal punch-buggy! Finally we come to the Sentinel of Liberty and his arch-nemesis Nazi; Captain America vs. Red Skull! Again, the minifigures are extremely simplistic in style but are oddly charming. Cap has this manic, pupil-less expression and a huge star on his chest while Red Skull doesn’t look so much menacing as perplexed. I do love the boss-eyed HYDRA insignia on Skull’s back (Hail DERPDRA) and their accessories are unchanged from other appearances, being Cap’s shield and Skull having a clear block to represent the Tessaract. Red Skull’s micro-kart is a simplified version of the HYDRA tank he had in a previous set with Captain America. Speaking of, Cap’s little tank is the most Wacky Races thing I’ve seen so far and it just makes me smile. I really dig it! All in all, the LEGO Marvel Mighty Micros are an absolute blast. For £8.99 a pop, you get two little vehicles made from less than 100 pieces. They’re cheap, quick and immensely fun builds that I hope will be eaten up by superhero fans both young and old. We’re not quite done with the Mighty Micros just yet as I’ll be back in a few days time with DC Comics’ offerings so I’ll see you guys next time for another Mint in Box!