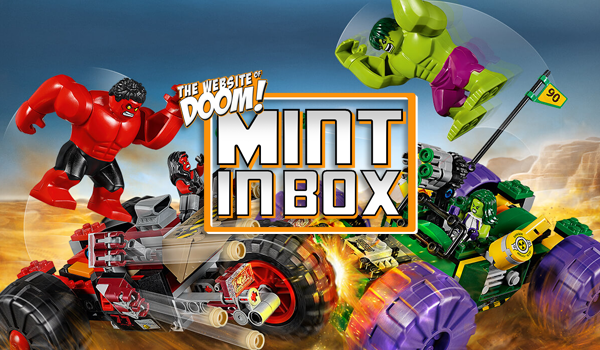 It’s time to break into the 2017 Marvel Superheroes offerings with a look at the big and boisterous 76078 Hulk vs. Red Hulk set from LEGO! This behemoth of a box weighs in at 375 pieces and retails for around £54.99! Contents include 4 bags of assorted pieces, a bag of assorted wheels, a Hulk BigFig, a Red Hulk BigFig, two instruction booklets, a sticker sheet and a comic showcasing the entire range! Kicking of with the big, bad, Big Figures; while it may appear that the multi-coloured monster men share the same body, Thaddeus ‘Thunderbolt’ Ross aka Red Hulk only repeats the arms Bruce Banner’s green goliath. The head/shoulders are unique to this BigFig, as are the lower torso and legs, which do not share the moulded-on pants. Meanwhile, with the distaff Hulks — Jennifer ‘She-Hulk’ Walters and Betty ‘Red She-Hulk’ Ross — we see a more standard Minifigure but with interesting printing on both. Each is a fantastic representation of their comic book counterpart on a standard Minifigure body and both receive a reversible anger face. The first to be built is Team Red Hulk’s vehicle, which sadly doesn’t have a name so I’m going to call it the Red ‘Recker for ease of differentiating it from Team Hulk’s. The main body mostly consists of the rear base and the sled for the bumper-bashing, Hulk-launching mechanism. The rest is building a pseudo-engine and attaching the ball-jointed stud-shooters. Once complete, you have an awesome three-wheeler with space for both Red Hulks and six stud-shooters! Team Hulk’s vehicle, thus to be referred to as the Gamma Jammer, is built in almost the exact same fashion as the Red ‘Recker — barring having two front wheels and more green and yellow bricks and a rotating stud-shooter akin to the Bionicle sets I reviewed back in 2015. As with the Red ‘Recker, the Gamma Jammer is a rough and tumble vehicle that perfectly matches Team Hulk. With both side-by-side, both vehicle look fantastic but now it’s time for the set’s main gimmick, which is to smash into each other has hard and as fast as you can make them to launch their respective Hulks into the air for a mid-air brawl!

After repeating the crash a bunch of times; not only are both vehicles incredibly sturdy and can take a beating thanks to the bumper pieces in the front but the two Hulk BigFigs consistently slam into each other in mid-air. The LEGO 76078 Hulk vs. Red Hulk set is a robust and rugged set for those kids who like to really play with their toys and, thanks to solid construction, there’s little chance of them falling apart in the course of the recommended play pattern. If you or your kids are fans of the Hulk family, I highly suggest picking this set up because, if nothing else, what other LEGO sets actively encourage you to slam two vehicles together? This set is available for £54.99 from most good retailers and the LEGO online store.