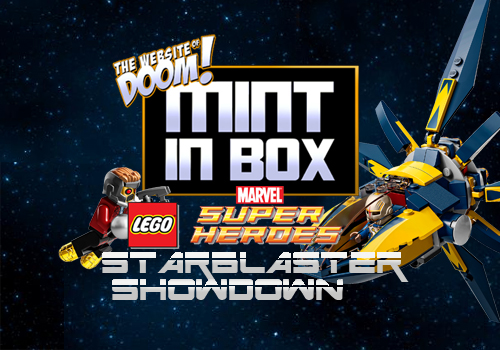 I can’t stop this feeling. I’m hooked on it, in fact.
With the Guardians of The Galaxy movie blasting into cinemas soon, LEGO has kindly sent me one of their sets to review so join me as take a look at the stellar 76019 Starblaster Showdown! This set contains two bags, an instruction booklet, a sticker sheet and a fun little comic detailing the adventures of the Guardians but if you flip the comic over, you get the story for the 76022 X-Men vs. The Sentinel set! Let’s take a gander at the minifigures! This set has a nice variety of minifigures, with the heroic Star-Lord, a dutiful Nova Corps Officer and a sinister Sakaaran Soldier! Star-Lord (played by Chris Pratt, who now has two minifigures from two different movies!) features a double printed face and hair piece but the real draw is his signature mask, complete with spiky hair sticking out the top. He also comes with two blasters, yellow pieces for his rocket boots and the mysterious orb! The Nova Corps Officer is surprisingly old, with a wrinkled facade hiding under his brilliant helmet. The Sakaaran Soldier, a far cry from the pink-skinned humanoids of the comics, features a double-printed face with a veil on one side and a terrifying insectoid face on the other. His blaster rifle is a brand new design too! All the minifigures have gorgeous printing on their other body parts that really bring out the character in all of them. The first bag is entirely for the Starblaster vehicle, which seems to be a fighter employed by the Nova Corps, an intergalactic police force. The cockpit is a great build with larger pieces, sloped bricks and a couple of sticker applications thrown in to add some detail and colour onto the control panel and cockpit sidings. Flick missiles are put on the underside of the craft and, once the model is completely, serve adequately as landing gear. It’s with the engine assembly that I had the most trouble, as it had lots of layers of tiny pieces and the sticker application on the fins was truly aggravating. Thin stickers onto thin panels had me there for about 20 minutes trying not to come out with slanted decals. It’s a much more involved build than any other part of the set and it really played havoc with my OCD but… … You can’t argue with the final product! The Starblaster looks AMAZING! It’s sloped lines and aerodynamic profile give it the feel of a high-speed pursuit vehicle. Spreading out the fins for “arrest mode” also give the vehicle so much character. The colours work well with Nova’s and you end up with something beautiful. The Sakaaran Soldier’s fighter is kinda of a let down for me. Compared to the astounding Starblaster, the Sakaaran fighter looks a little weak and thrown together. Still, the build is very quick and simple, with only the sticker applications on the cockpit presenting a challenge. The bricks are a mix of dark reds, greys and blacks, denoting it as the villain ship. Given the new look of the Sakaarans, the fighter’s strange profile makes much more sense, looking more insect-like and giving the small craft more personality than it’s build belies. 76019 Starblaster Showdown is the entry level set for the Guardian’s subline of the Marvel Super Heroes Theme. It retails for £19.99 and is well worth the money in my opinion. Characterful minifigures, lots of accessories and a fantastic spaceship give this set all you could ask out of a LEGO set. As the introduction to the larger Guardians sets, LEGO did a fantastic job and I highly recommend this out of this world set!