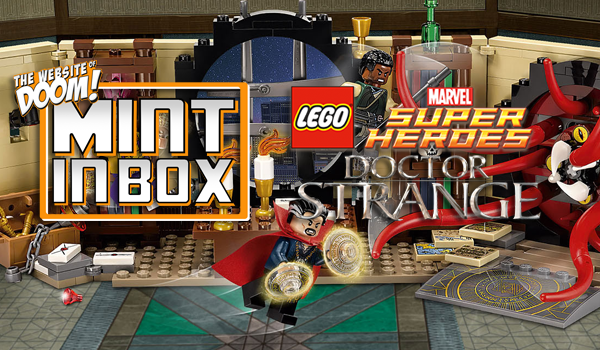 It seems to be Doctor Strange week here on DOOM between the movie releasing and Mars Needs doing a commentary for the 70’s TV movie so I’m getting in on the action with LEGO Doctor Strange’s Sanctum Sanctorum! This set retails for around £29.99 and features 358 pieces for a 7-14 age range. You can find it at most good retailers and on the LEGO shop website! Opening up the box, we’re treated to three bags of assorted parts, two instruction booklets, one sticker sheet and one base plate. As per, we’ll be taking a look at the minifigures first and look at this trip of stern-faced folk. You’re using magic, people, crack a smile at least. Look at Ancient One – she gets it! Doctor Stephen Strange looks pretty faithful to the movie design and includes some pretty nifty magic sigil discs. This is the first time I’ve dealt with this kind of cape too and after some initial fiddliness, I’m pretty impressed with it. The Ancient One, similarly, looks spot on with Tilda Swinton’s bizarrely flat face but jokes aside, she’s got some weird lines all over her bonce that confuse me. Is it hair, is it wrinkled flesh? I’m sure it makes more sense in the movie but here it looks odd. She also wields some eldritch-emblazoned fans as weapons so that’s cool. Karl Mordo is dreadfully boring, design-wise. So much so that he doesn’t get magic, he gets a quarter staff. From the trailers, Chiwetel Ejiofor has a wry humour about him and I wish that was conveyed on the minifigure’s face. Fitting with the Sanctum Sanctorum, the base plate layout is all odd angles and bizarre brick placement that doesn’t seem cohesive until you step back and see the finished result. The actual building process is deceptively simple. The finished set looks more complex thanks to the large portal beast and a nicely cluttered living space, giving it a nice dense feeling. Amongst the good Doctor’s various possessions includes a chest full of jewels and keys, bookcases filled with arcane tombs, assorted magical tchotchkes and various grimoires and letters; one from Stark Industries, interestingly. The portal beast is my favourite part of the set because of it’s simplistic but highly effective gear system that makes for a truly menacing mollusc.

There’s also a couple levitation gimmicks sprinkled in, one for the Doctor’s cape and for the minifigures themselves which is pretty fun. Between a smooth build and fun gimmicks, I had an absolute blast with this set and with the movie coming out, I highly recommend this is as the perfect Christmas gift for any budding Sorcerer Supreme!