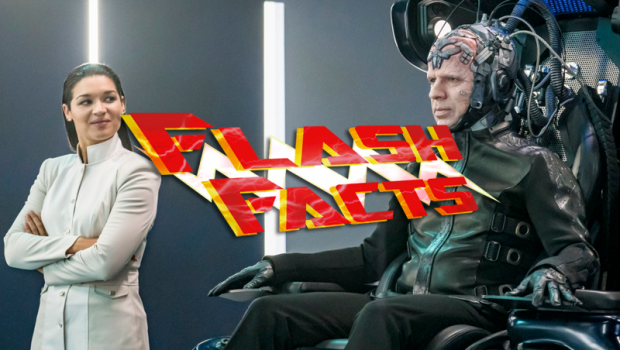 Flash Facts – “Therefore I Am”

I think this is my favourite episode of the season so far!

Therefore I Am does a lot of good to redeem this season for me because it lays out exactly what the threat for this season is and it’s a doozy! DeVoe’s origin is something that takes us all the way back to the night of the particle accelerator explosion and nicely retcons certain events to include this new information.

Clifford DeVoe, from the outset, is a very understandable and relatable character; a brow-beaten teacher that struggles to engage with his students but, with the help of his wife and fellow teacher, and devises a ‘thinking cap’ to boost his intelligence.

Naturally, being around the time of the particle accelerator explosion, things don’t quite go to plan and while DeVoe’s intelligence is boosted, his body is slowly dying. We see him struggle with the fact that while his abilities can do good, it’s killing him while others are using their powers for evil and getting on with their life, which naturally turns him evil because he’s really gotten the short end of the stick, honestly.

I do like that DeVoe’s origin serves as a dark mirror to Barry’s and while he’s still clearly evil now, there’s still enough good to level with Barry about everything and to even allow him and Iris to get married in peace. At least from him, anyway…

Meanwhile, we see Barry’s impetuousness and desire to be proactive against this new threat have consequences as he is suspended for harassing the DeVoe’s without probable cause. While the rest of Team Flash rightfully admonish his behaviour initially, they back-peddle super hard once his suspicions are confirmed which I find odd because his behaviour is still sketchy as hell.

Luckily, the return of Wally means that the threat can be dealt with twice as fast! It’s great to have Keiynan Lonsdale back though I can’t be the only one who wished we could have seen his battle against Starro in Blue Valley. Also, if Wally’s back, how come he’s completely absent from next week’s mega-crossover? Why does Kid Flash always get side-lined!?

A really good episode this week and I’m excited to see more mind games with The Thinker going forward but before that, we’ll be taking a detour to parallel world next week as I will be covering the whole Crisis on Earth-X crossover event with reviews for all four episodes going up on Tuesday and Wednesday! I can’t wait!