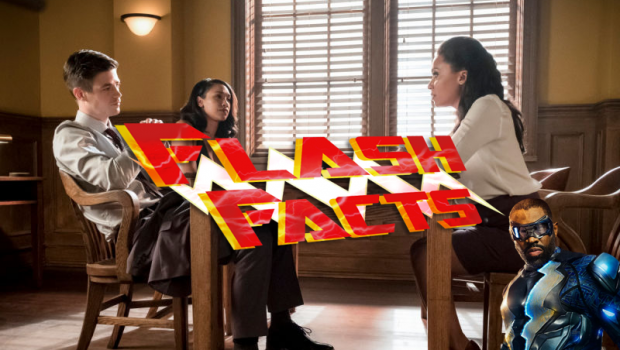 Justice, like lightning, should ever appear to some men, hope, and to other men, fear.

Hey, did you guys know that Black Lightning came out? Because it’s super good and I really enjoyed it and it’s got this cool Luke Cage vibe that keeps the show grounded (HA! Electric puns, I’ve got them!) and I-

What? No, I didn’t watch The Flash. It’s not out for another we-What? Oh. Um…

So Barry’s up the creek with no paddle, ain’t he? Thanks to the clever scheming of the now body-swapped DeVoe, Barry is standing trial for DeVoe’s murder and the fact that it’s so perfectly orchestrated is bewildering.

I would complain that DeVoe was able to arrange for all this evidence to incriminate Barry but Thawne was able to literally be in two places at once in the first season so I can let this slide. The episode is more focused on everyone’s efforts to save Barry and Barry himself doing Sweet FA because that’s… what… his… dad… did? I think it’s been properly established by now but Barry is an idiot and him thinking he will somehow be vindicated despite ALL OF THE EVIDENCE against him.

Meanwhile, Iris and Cecile have the right idea; Barry should reveal he’s The Flash. Not only has he garnered enough good will in Central City to earn a medal of valour, which is nicely juxtaposed with the judge calling Barry a sociopath during sentencing, but the old cliché about putting his family in danger doesn’t apply here.

Team Flash is constantly in danger and, more often than not, by the main arc villains who already know who Barry is! After Thawne, Zoom, and Savitar, who is he so scared of? Mirror Master? Peek-a-Boo? That jobber Rainbow Raider? Please. But no, Barry’s love convinces Iris not to do it and that’s so dumb and I’m moving on to some of the good parts of the episode.

We get a couple scenes of Joe and Ralph which are really good, the second of which sees Joe try to convice Ralph to plant evidence in DeVoe’s house. We get a powerful monologue from Ralph that really delves into his feelings on his own fall from grace for doing the exact same thing Joe is contemplating. It’s a fantastic scene with some genuine pathos and I hope they let Hartley Sawyer have more scenes like this.

In the B-Plot, the rest of Team Flash are dealing with a new Meta dubbed ‘Fallout’ due to being a walking nuclear reactor. While the character is absolutely nothing, it does lead to one of the funniest exchanges between Cisco and Wells and a reluctant Caitlin.

The only thing that I kinda like in the main plot is that the cell that Barry is placed in was his dad’s. Yeah, it’s trite and arguably a dick move on the Warden’s part but it got a smirk out of me.

So yeah, I wasn’t overly impressed with this mid-season opener since I watched this after the far superior Black Lightning premiere, which I earnestly recommend watching because it’s amazing. We’ll be back next week with Ralph taking centre stage while Barry is in jail with The Elongated Knight Rises.