Cats! The internet cannot get enough of them, and neither can I. Ikea! That’s also a thing people like. Let this handy allen key unlock new heights of near-2D felinity!

Do you remember those logic puzzles where Bob sits opposite a woman wearing a blue hat, Mandy is wearing a hat, and is sat to the right of Alberto, and Reverend Hawksby is deathly allergic to the colour blue, and is wearing only a strategically-positioned lotus flower? I was potentially good at those as a child, but didn’t have the mental room to manoeuver all the pieces. Thinkfun’s Cat Crimes finally enables adult  me to externalise similar logic problems using a crowd of extremely suspicious card kitties. 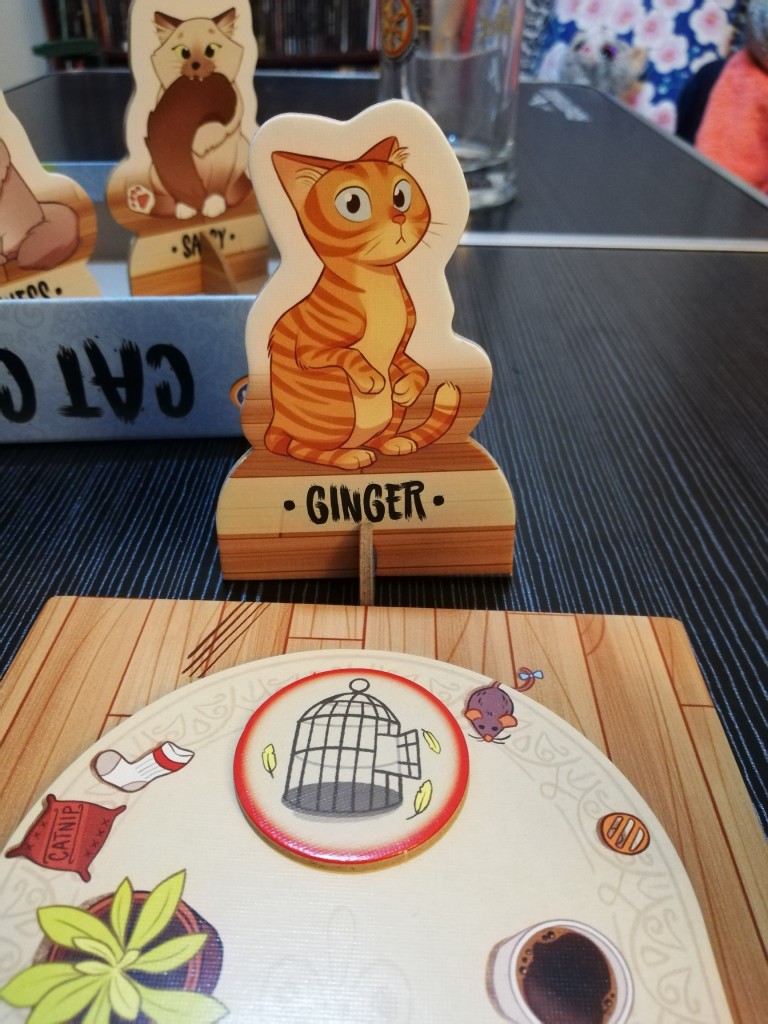 Have you seen the canary, Ginger?

Similarly to other Thinkfun titles, Cat Crimes offers a 40 pre-set ‘cases’ of increasing complexity. You’ll find ruined shoes, spilled drinks, and absent budgies, and nobody’s paws are clean. The production is phenomenal, the art offers more than mere cuteness, and the pieces are glossy and thick. Even the board has a separate elevated rug section because it’s nicer that way. The game itself has a limited lifespan, as once you’ve solved each puzzle, there’s no more mystery to be found, but Cat Crimes is hardboiled logic with adorable, guilty furballs, and made me feel like a very smart 8 year-old. 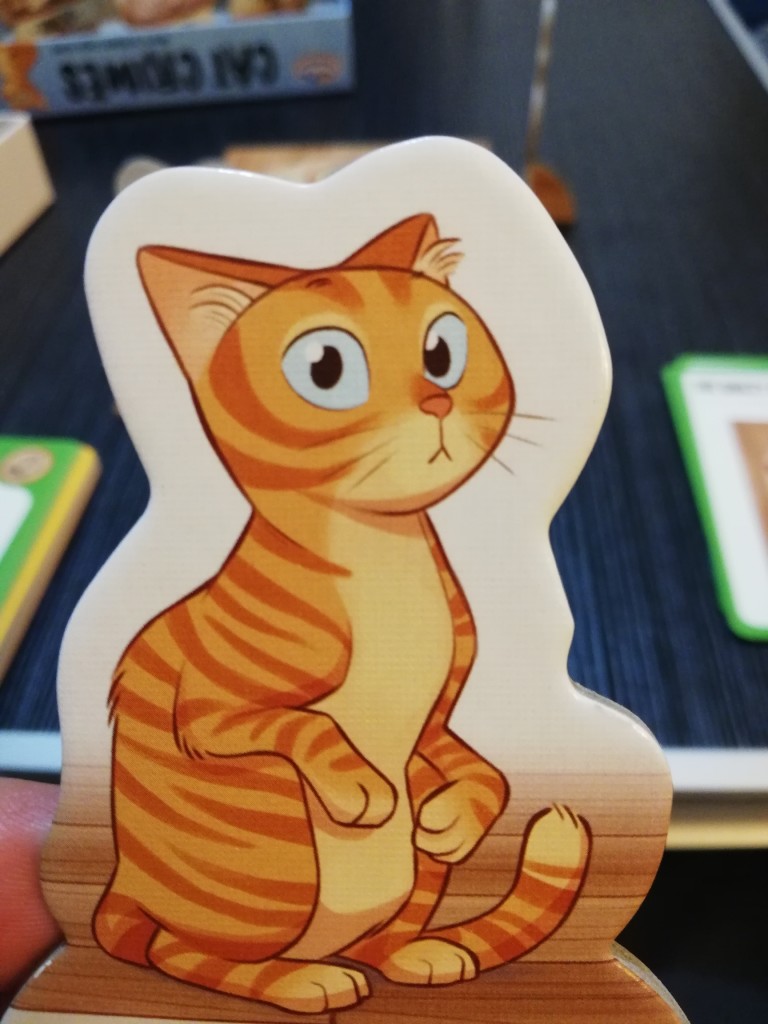 The fuzzy face of guilt.

What other hijinks can be had in the world of nigh-2D mogs and Macavitys? Cats love to be high up, loftily perching to stare down upon the naked thicko-kittens that serve them, and Cat Tower invites you to stack them higher still. Dressed in the unmistakable graphics of Aza Chen, Cat Tower is another Best In Show, and another one for children and drunk adults alike. A chunky wooden die dictates how you add foldy-card-cats to the tower until the inevitable ‘critical loss of dignity’ moment when it tumbles. 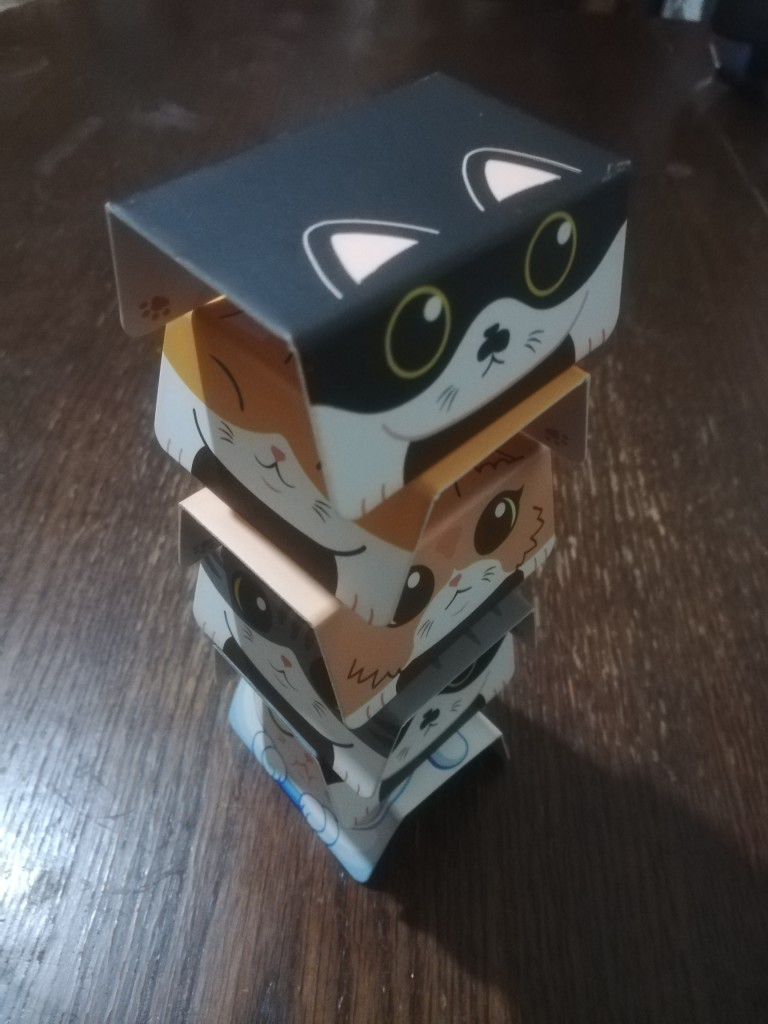 The aim is to play every card you have, and the tower’s collapse brings a penalty, not the game’s end, still it’s not going to outlast short attention spans, and there’s some potential for mildly nobbling other players. The Kickstarter edition includes both the Cat Tower Plus and Cat Tower Lite variants and their lack of availability at retail has limited the game’s potential. There are a few other tweaks to what is a very well-worn formula, but as sweet as it is, Cat Tower pales next to the tension and sheet physical heights of HABA’s Rhino Hero. 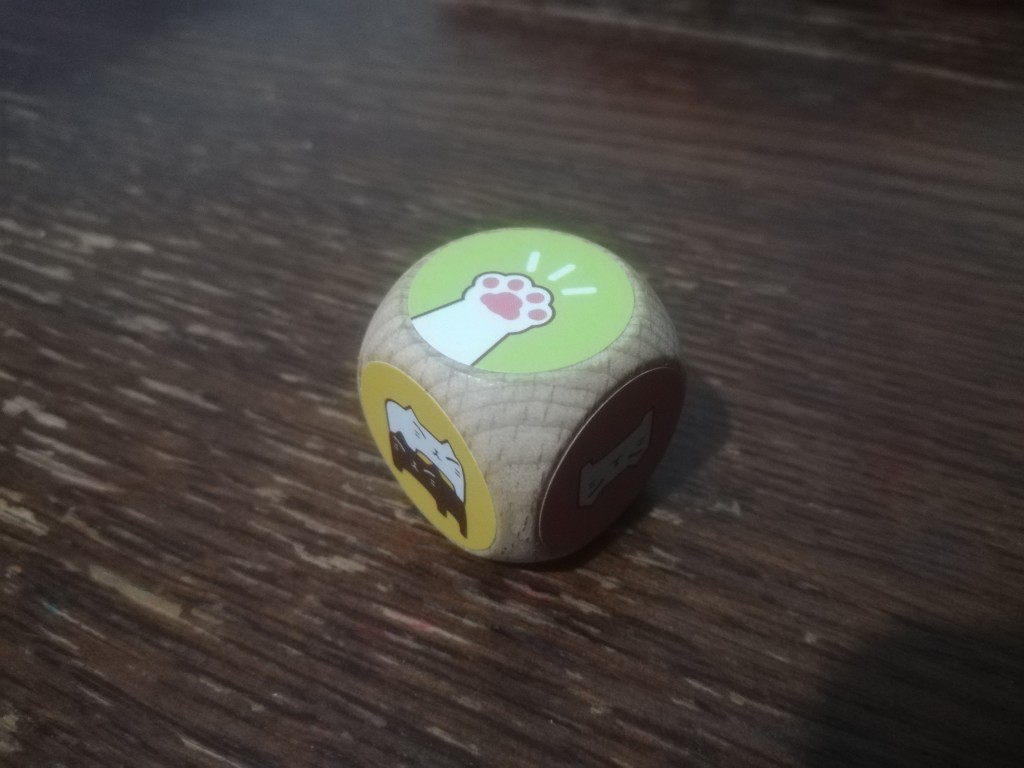 Ask not for whom the paw rolls

A cat’s daily routine isn’t all antics and mischief. Fortunately for everyone, Toppy Noppy has produced a collection of modest trapezoidal monuments to feline inertia: Cats on Stuff. This is a sharply printed, and precisely cut collection of indifferent papercraft moggies, and places for them to stubbornly sit. Requiring neither knife, nor glue, you can reenact accurate cat obstructions with a few simple folds and tab-tucks. 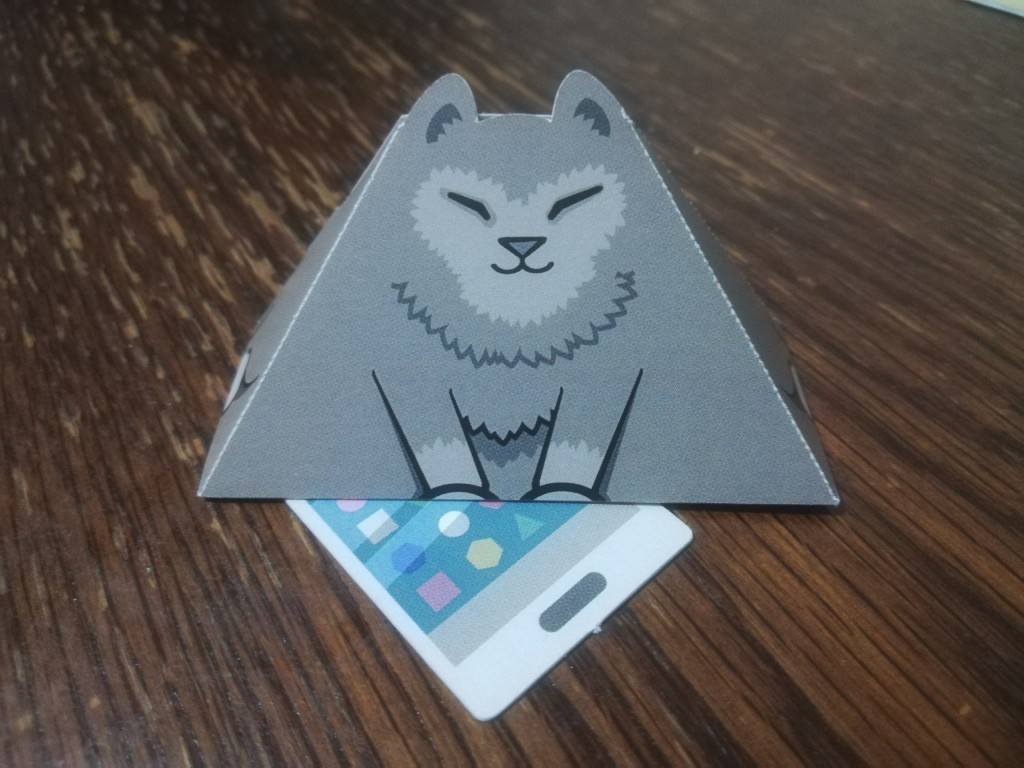 Pads on a pad

Will you choose ‘large cat on too-small box,’ ‘fluffy shedding on clean t-shirt,’ or the timeless ‘small, but immovable cat on warm laptop’? I’m particularly fond of the cuddly, smug cat, and the boss-eyed maniac. Simplicity is the key to Toppy Noppy designs, focusing on simple, sharp angles, clean lines, and bold patches of colour; this isn’t a construction challenge. 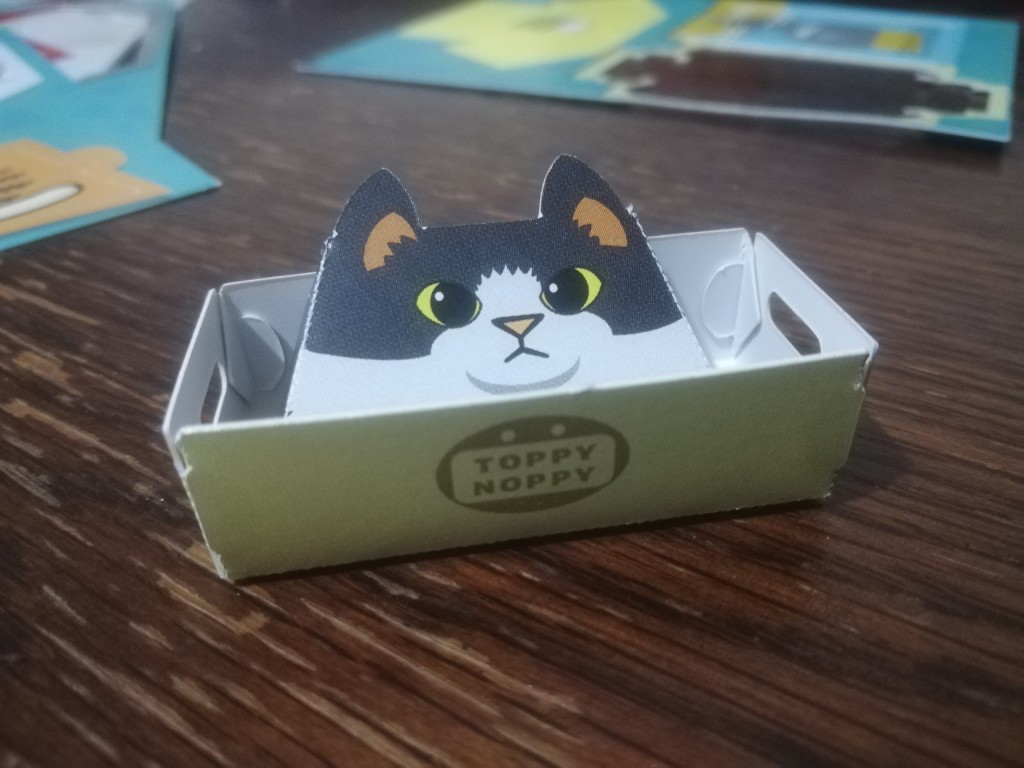 I could call Cats on Stuff a cute desk toy, or a fun gift, and both of these things are true, but I found myself minutely adjusting the position of each cat until they looked just right as if installing an art exhibition in my own desk-based, cat-centric gallery. Though small and lightweight, the cats appear monolithic, inscrutable, and defiant. They are Cats. They are on Stuff. Your Stuff. 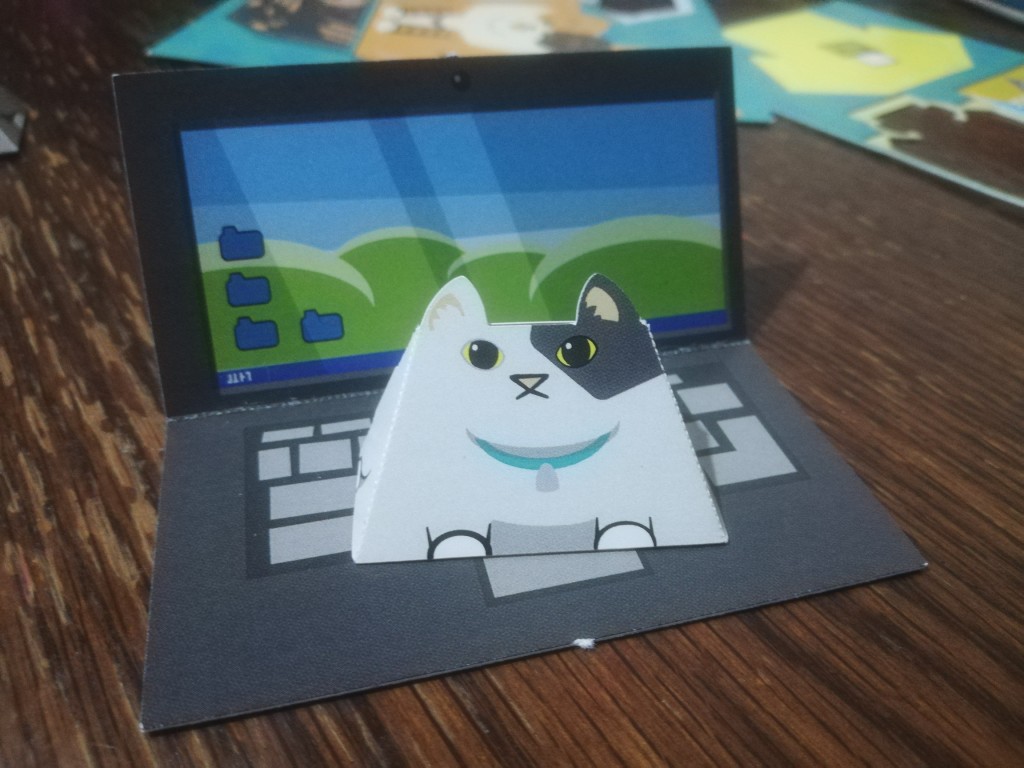